Many of our clients purchase rare books on economics and finance as holiday gifts or for their own collections. If you aren’t sure where to start or are looking for suggestions, this post will highlight some popular and important books and authors.

What Charles Darwin is to science, Adam Smith is to economics. His 1776 An Inquiry Into the Nature and Causes of The Wealth of Nations is the “first and greatest classic of modern economic thought” (Printing and the Mind of Man 221). 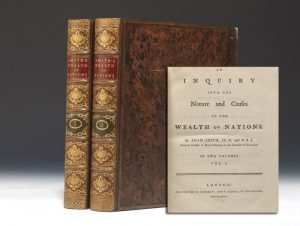 Smith’s landmark work on free market economics is one of the most influential books ever published, not only in the field of economics, but also history, philosophy, and politics. Published during the American Revolution, it was of immense importance to America’s Founding Fathers, particularly Madison, Hamilton, and Jefferson, who frequently recommended it in his letters.

In political oeconomy I think Smith’s wealth of nations the best book extant.

The rarest and most significant editions of Wealth of Nations are the 1776 first edition and the 1789 first American edition. However, any 18th-century edition would be collectible, such as this handsome 1793 edition. 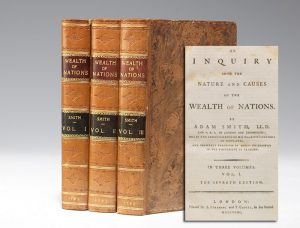 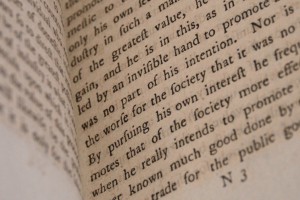 “…he is in this, as in many other cases, led by an invisible hand….”

Another major figure of early economic thought is Thomas Robert Malthus, whose most famous work is An Essay on the Principle of Population; or, a View of its Past and Present Effects on Human Happiness. The first edition was published in 1798, but the 1803 second edition is preferred, as it was greatly expanded (it’s four times larger than the first edition) and was the first to carry Malthus’ name.

The work strongly influenced social policy, and Darwin and Wallace acknowledged Malthus as a source of the idea of “the struggle for existence.” 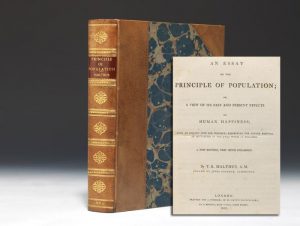 The power of population is so superior to the power in the earth to produce subsistence for man, that, unless arrested by the preventive check, premature death must in some shape or other visit the human race.

Malthus’ other important work is his 1820 Principles of Political Economy, in which he argued that the nation must balance “the power to produce and the will to consume.” 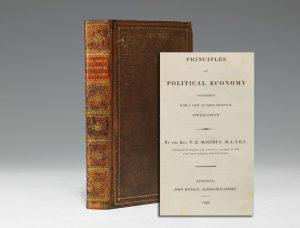 One of the most influential economists of this period was David Ricardo, the first “scientific” economist, who decided to devote himself to the subject after reading Smith’s Wealth of Nations. Ricardo’s most important work is his 1817 On The Principles of Political Economy and Taxation. Two other notable editions of this work were both published in 1819, the second edition and the first American edition. 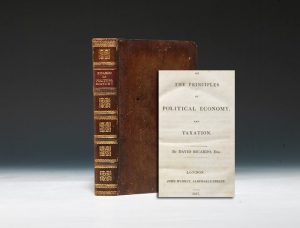 If you prefer more recent history, consider the works of two of the most influential economists of the twentieth century, John Maynard Keynes and Milton Friedman.

In contrast to Adam Smith’s laissez-faire economic philosophy, Keynes believed governments should use fiscal and monetary policy to manage their economies and increase economic activity during downturns by borrowing and spending money.  Keynes is one of the founders of modern macroeconomic theory, and his ideas greatly influenced governments in the aftermath of the Great Depression and through the present day.

The difficulty lies, not in the new ideas, but in escaping from the old ones, which ramify, for those brought up as most of us have been, into every corner of our minds.

Two of Keynes’ most important works are the 1930 A Treatise on Money and the extraordinarily influential 1936 General Theory of Employment, Interest and Money. 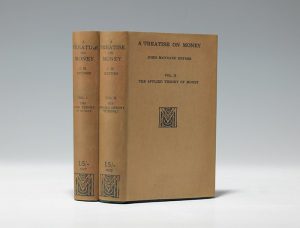 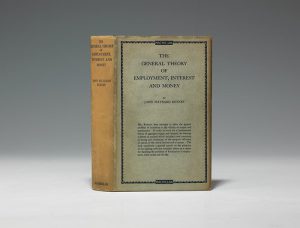 Milton Friedman, Nobel Prize-winner and leader of the Chicago school of monetary economics, published a number of significant books and articles. His 1953 Essays in Positive Economics contains the first appearance of his pivotal essay, “Methodology of Positive Economics,” which is “the most cited, influential, and controversial piece of methodological writing in 20th-century economics” (Uskali Mäki).

The construction of hypotheses is a creative act of inspiration, intuition, invention; its essence is the vision of something new in familiar material.

Milton often collaborated with his wife Rose, also an economist, most notably in the classic 1962 Capitalism and Freedom, which the Times Literary Supplement selected as one of the “hundred most influential books since the war.” 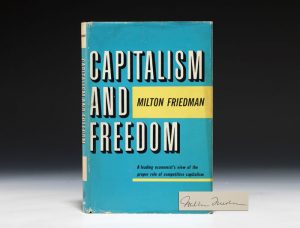 In 1998 Milton and Rose Friedman published a joint autobiography about their personal and professional partnership, Two Lucky People. They were married for 68 years, until Milton’s death in 2006.

If you’re interested in finance and the stock market, these are some highly sought titles:

Richard Wyckoff’s 1930 Wall Street Ventures and Adventures through Forty Years is a fascinating insider’s view of the stock market, forecasting, and market manipulation. 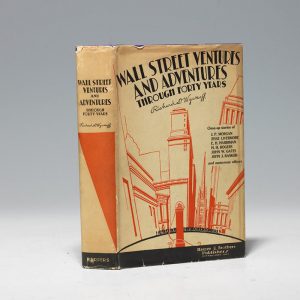 The Bible of modern financial analysis is Benjamin Graham and David Dodd’s 1934 Security Analysis. Written in the wake of the stock market crash, their “value-oriented investment” was a disciplined, realistic approach to building a solid portfolio, and this popular work continues to shape financial strategies. 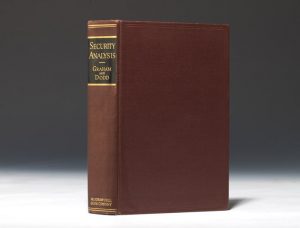 Jesse Livermore, one of Wall Street’s most flamboyant stock traders, published in 1940 How to Trade in Stocks: The Livermore Formula for Combining Time Element and Price, in which he explained his highly successful trading method, still in use today. 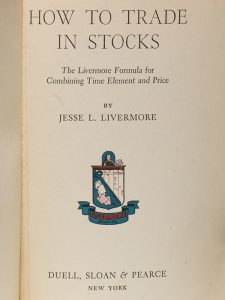