If you love American history, you may find a particular joy in collecting rare books related to the nation’s presidents. For many, the presidency holds an exceptional fascination as a glimpse into American history through the lens of leadership. Here is a short road map for your collecting journey.

The Founding Fathers who became presidents

No discussion of the American presidency would be complete without George Washington. While he did not write as prolifically as his peers, there are a number of works that tend to excite collectors. Of works he composed, Washington’s historic Farewell Address warning against political parties is highly sought. 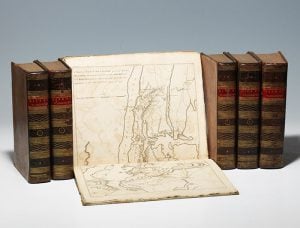 A first edition of Marshall’s Life of George Washington, with the atlas of Washington’s battles (BRB 103422)

But there are other major figures who called upon their highest talents to write about the first president. John Marshall, one of the most important Chief Justices of the Supreme Court who largely established the practice of judicial review, wrote an eloquent biography of his friend, including an atlas volume of Washington’s Revolutionary War battles. In addition, we have Henry Lee to thank for the unforgettable eulogy of the Father of His Country, which includes the immortal lines, “first in war, first in peace, and first in the minds of his countrymen.” 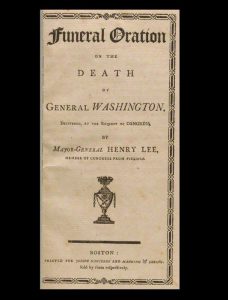 Works by John Adams and James Madison are especially rewarding to collect if you are interested in the nuts and bolts of America’s Constitution, its Bill of Rights, and the feat many doubted was possible: how to create a functioning democracy underpinned by philosophical ideals. The Massachusetts Constitution of 1780, composed largely by Adams, is an important forerunner to the federal constitution. His 1787 Defence of the Constitutions is a remarkable document arguing for principles now considered foundational to the American political system, such as checks and balances. 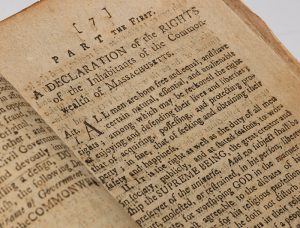 Madison, of course, is the Father of the Constitution and the Father of the Bill of Rights. During the ratification debate, Madison teamed up with his later political rival Alexander Hamilton to write the essays known collectively as  The Federalist Papers. Although written with the goal of ratification in mind, the Federalist has since become one of the most important contributions to American political science and is still used today to help us interpret the Constitution. 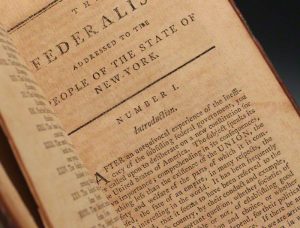 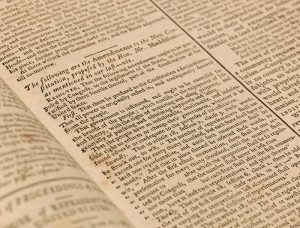 Thomas Jefferson is best known for composing the Declaration of Independence, for which there are a number of magnificent early 19th century facsimiles to wow lovers of history. (My personal favorite is the Force Declaration.) But Jefferson also contributed to major writings of the Continental Congress before the world-changing Declaration of Independence, most notably a year previously in the Declaration on…Taking up Arms, justifying the actions of early revolutionary militia at places such as Lexington and Concord. Jefferson’s peacetime writings are also of significant interest, such as his Notes on the State of Virginia, which was the model for Meriwether Lewis’ own journal during the transcontinental journey with William Clark. 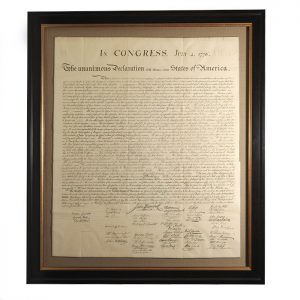 The Peter Force engraving of the Declaration of Independence (BRB 86182) 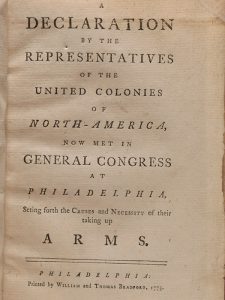 Title page of the first pamphlet printing for the Declaration on…Taking up Arms, composed for the Second Continental Congress by John Dickinson and Thomas Jefferson (BRB 89613)

Beyond printed matter, autograph material is always ready to surprise and delight. As of this writing we have a lengthy autograph letter by Thomas Jefferson concerning the death of his close childhood friend and personal slave, Jupiter. There are only three other known letters on the subject, which are housed at the Library of Congress, the University of Virginia, and the Morgan Library. Letters allow us a private glimpse into the everyday lives of these illustrious men, and as such they are endlessly fascinating. 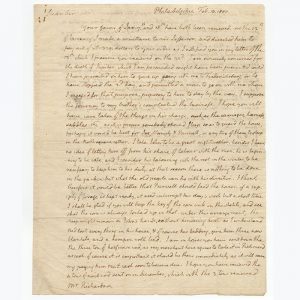 The first page of a lengthy autograph letter of particular historical interest, concerning the death of Jefferson’s slave Jupiter (BRB 103402)

After the first generation, the American presidency began its long and horrific road through Civil War. Presidents jumped into the fray early on, notably John Quincy Adams speaking with rarely matched eloquence against slavery and Andrew Jackson’s actions during the Nullification Crisis sparked in South Carolina. Abraham Lincoln’s election, finally pushing South Carolina into secession, meant an end to the decades of appeasement, détentes, and peaceful negotiation. The famous Lincoln-Douglas debates naturally touch on slavery and demonstrate Lincoln’s early genius, but any document signed by Lincoln during the war is also highly desired. 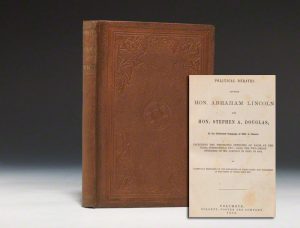 General Ulysses Grant accepted Robert E. Lee’s surrender and soon followed the path of other military darlings into the presidency. Unfortunately, his terms as president were wracked with corruption and scandal. But before his death by throat cancer, Grant was able with the help of Mark Twain to publish his Memoirs, now considered one of the best military autobiographies ever produced. 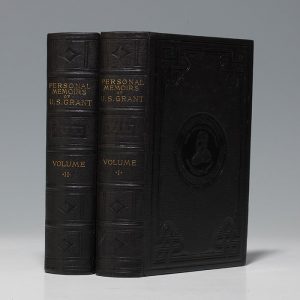 A first edition of Grant’s Memoirs, this copy presented by Grant’s son at his father’s direction, as it was published posthumously (BRB 102387)

One can be stymied by the goal of collecting each president when it comes to the statesmen who were less prolific.  What does one do about a president whose legacy  does not include many published writings, such as James K. Polk or Warren G. Harding? In fact, this problem doesn’t tend to bother collectors one bit: a book signed, owned, presented or inscribed by a president carries special significance beyond authorship of the work. Many collectors prefer this route because it grants them a more direct connection with the person. Our latest catalogue contains an entire section dedicated to this idea alone, so take a look there for a taste. 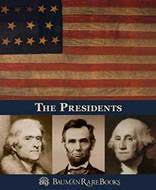 We expect a book owned by Thomas Jefferson to be rare. But William Henry Harrison? While his signature alone isn’t particularly rare, it’s a collector’s challenge to find a book signed by him. Historians surmise we have his widow Anna Harrison to blame for this: she had the habit of cutting her husband’s signature out of his books to grant to autograph keepers. Any volume signed by Harrison is sought after with excitement. Similarly, James Garfield’s term as president was one of the shortest in history because he was shot only a few months after his inauguration. While his signature is not terribly rare, anything signed while president is especially unusual and desirable, such as this presidential autograph album. 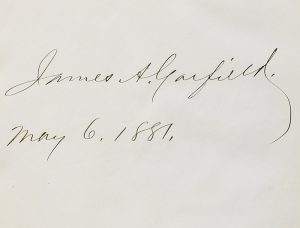 Signed by Garfield while president (BRB 103436)

While Theodore and Franklin D. Roosevelt may have diverged in many of their political ideas, one word for both of them is this: bold. Theodore made his name as a writer completely separate from his political aspirations, although both drew on his image as the quintessential American man. Collectors love his colorful works such as African Game Trails and Winning of the West.

One book that often draws the eye of collectors is the 1936 Democratic Book sold to Democratic parties donors and signed by FDR. But Eleanor was the more prolific writer, going on to produce a number of impressive memoirs about her life before, during and after her marriage to Franklin. 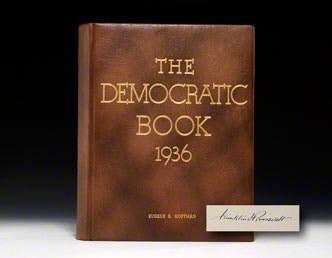 The Beginning of the Cold War

Harry Truman’s decision to drop the atomic bomb changed the world, and he knew it. Dwight D. Eisenhower, the Supreme Commander of the Allied Forces in World War II, produced memoirs not only about his Crusade in Europe but also about his time in the White House. 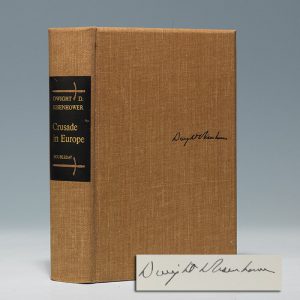 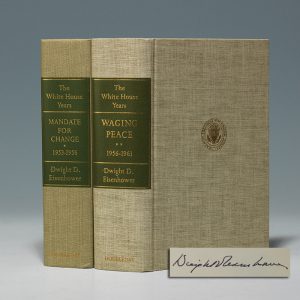 And we cannot forget John F. Kennedy: while a U.S. Senator he published the Pulitzer-prize winning Profiles in Courage, about men who showed “political courage in the face of constituent pressures.” Books signed or written by Jackie O. and other first ladies are naturally a rewarding path to explore as well. 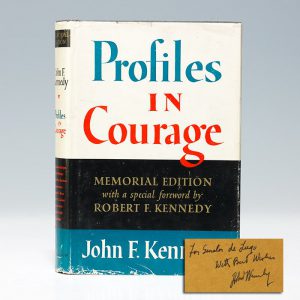 The Memorial Edition of Profiles in Courage, signed by Robert Kennedy (BRB 103322) 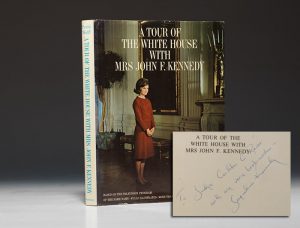 For collecting purposes JFK marks a turning point into the modern presidency. Following the footsteps of Eisenhower’s bestsellers, Lyndon Johnson produced his White House memoir, Vantage Point. But the real change came with Richard Nixon. After his resignation, one of the most hated men in America sold his Memoirs for a reported $2.5 million. He went on to write a variety of intelligent best-selling works, including Real Peace and Leaders. memoir. In the late 20th century we began to expect books by our leading statesmen and stateswomen. A few samples are below, but for more take a look at our introductory post on collecting books by 20th century leaders. 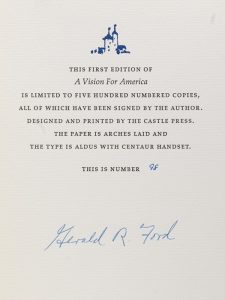 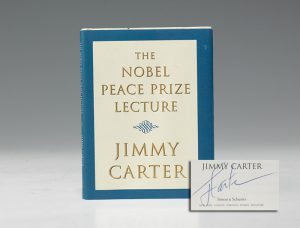 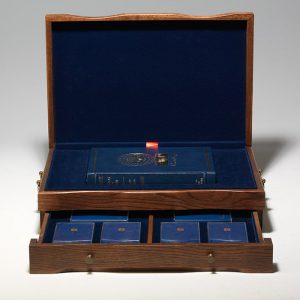 Signed limited first edition of Reagan’s selected speeches, with audio recordings of the speeches from the book (BRB 102330)

In this brief journey I’ve tried to point out some particularly fascinating landmarks along the way, but there is far more to explore. Take a look at our new catalogue online, which is devoted exclusively to American Presidents:

Or visit one of our galleries; through February both our New York and Las Vegas locations will display specially prepared showcases of presidential material.

If there is any item on this page that is no longer available but about which you’d like to hear more, please give us a call: