Did William Klein know how to take photographs when he created the images that made him famous? If you asked him today he would likely answer he did not. A statement that is possibly true from a historical perspective, but definitely false when you consider the originality of his work.

Born a New Yorker, but infused with wealth of Parisian culture having studied there, upon his return to the island of hills, he found the city to be vastly different from the one he grew up in. It was this difference that he decided to record, and visually his sole aim, and subsequent achievement, was to match the intensity he found wherever he looked.

He accomplished this vision by disregarding known notions of composition, exposure and design, and by getting in close to his subjects. He had worked as a fashion photographer, but this industry did not provide the creative satisfaction he was after, although seeing these commercial images it would seem he tried his hardest to make it so.

No, the freedom he sought would be found on the streets and from seeing them as if for the first time. Working in a fast-paced, seemingly slapdash way, he greedily captured the hustle and bustle, commerce and manmade graphic design to be found at ground level.

In avoiding perfection in his images – from a purist’s technical point of view – Klein successfully let loose grain and blur. He also used to his advantage bleached whites and bottomless blacks to mirror the shadows and light formed not only by the street-level paraphernalia, but also by the characters that crossed his path as well as the interactions between the two. 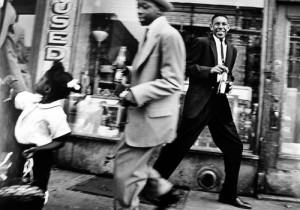 Anything that caught his eye was documented and without limit. The common elements are hectic, brash and in your face, sensibilities that add up perfectly in one of his most famous images of a pair of young boys, one with a toy gun pointed directly at the camera (top image). Both the posturing and the look of grimace upon the boy’s face cementing Klein’s aesthetic argument.

Life is Good & Good for you in New York stands as a genre-changing triumph. It defined the atmosphere of the city at that time and its success would lead to similar books featuring Rome, Moscow and Tokyo.

And while the landscapes changed his indomitable style remained the same – motion pictures and unexpected results. Did William Klein know how to take photographs when he created the images that made him famous? Perhaps not, but he sure knew how to make them.