The Writer, the Painter, and the Department Store Tycoon

In 1929, George Macy (of department store fame) founded the Limited Editions Club press for the purpose of publishing beautiful livres d’artiste.  Artist’s books, which became especially popular in the early decades of the 20th century, most often pair a work of classic literature with illustrations by a successful, well-known artist.  The books are usually produced in very limited numbers and are almost always signed by the author, the artist, or both.

Over the years, the LEC has produced exceptional editions of myriad great works; among them are Aristophanes’ Lysistrata with illustrations by Pablo Picasso, Whitman’s Leaves of Grass with photographs by Edward Weston, and Bradbury’s Fahrenheit 451 with illustrations by Joseph Mugnaini.  Arguably the LEC’s greatest production, however, is its edition of James Joyce’s Ulysses, which features 26 full-page illustrations by Henri Matisse.  (Six of those illustrations are soft-ground etchings, which constitute Matisse’s only use of that medium.) 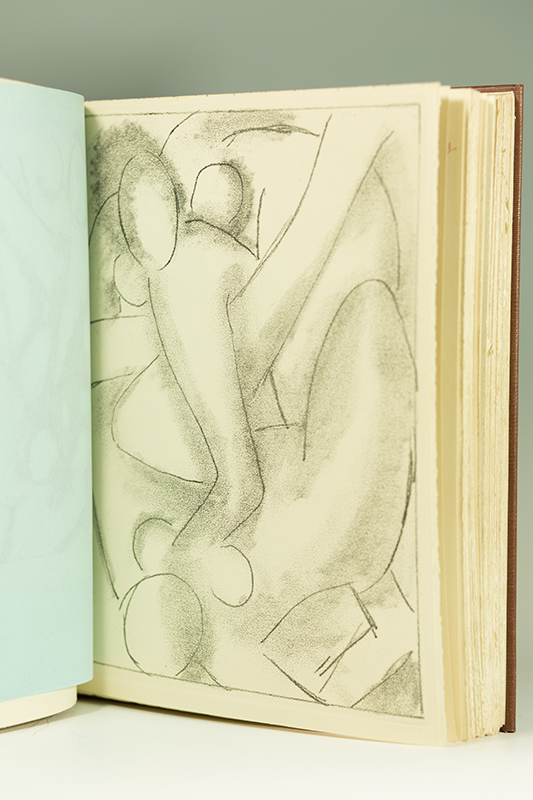 In February 1934, George Macy contacted Matisse, asking if he would illustrate a book for the LEC.  His inquiry included a list of six possible titles along with a request for as many illustrations as $5000 would net.  Around the same time, Macy contacted Joyce with a proposal, and by May, everyone was in agreement: Matisse would provide artwork for the first illustrated edition of Ulysses.  Hammering out and approving the specifics of style and content would take the rest of year.

BONUS FACT: In the last 25 years of his life, Matisse produced artwork for some 14 livres d’artiste, including Stephane Mallarme’s Poesies (1932), Charles Baudelaire’s Les Fleurs des Maul (1947), and Charles D’Orleans Poemes (1950).  In a 1946 essay, “How I Did My Books,” the painter writes: “I draw no distinction between the construction of a book and the construction of a painting[.]”  He goes on to add that the guiding principle of successful book design is a rapport with the nature of the book. 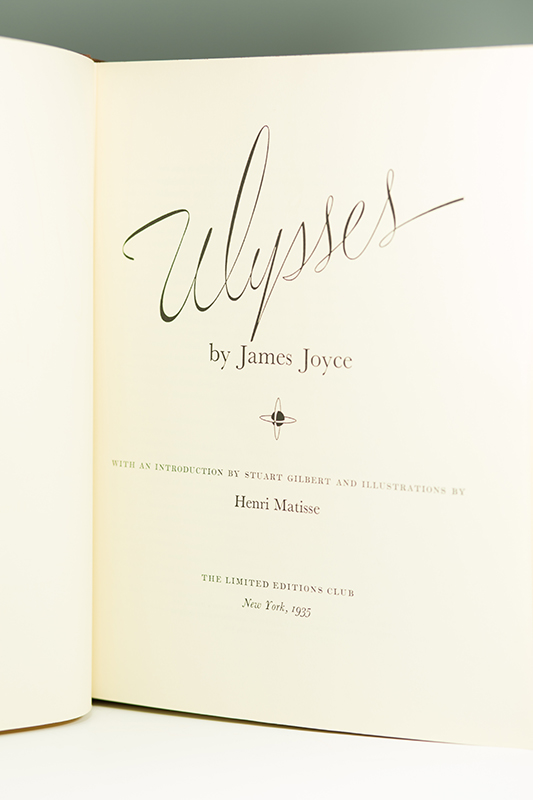 In October 1935, the Limited Editions Club’s Ulysses was published in an edition of 1500 copies.  Each copy was bound in gilt-stamped pictorial brown cloth and housed in a paper-covered slipcase.  Each copy was signed by Matisse, but only 250 copies were co-signed by Joyce.  Copies signed only by Matisse were priced at $10, and copies signed by both men were priced at $15.  A separate portfolio, which included six Matisse etchings, was also produced in a separate edition of only 150 copies.  (These portfolios are incredibly scarce.  It seems likely that many of them were broken up so that individual etchings could be displayed or even sold.)

There’s a well-known story that would have us imagine Joyce and Matisse in a room together, signing their way through a stack of 1500 colophons happily enough until Joyce unexpectedly learns that Matisse has based his illustrations on Homer’s Odyssey rather than Joyce’s Ulysses, that Matisse has in fact never read Ulysses and has no plans to do so.  In this version of events, Joyce storms from the room in a high dudgeon having signed only 250 of those 1500 colophons.  Matisse, however, perseveres until he’s signed them all. 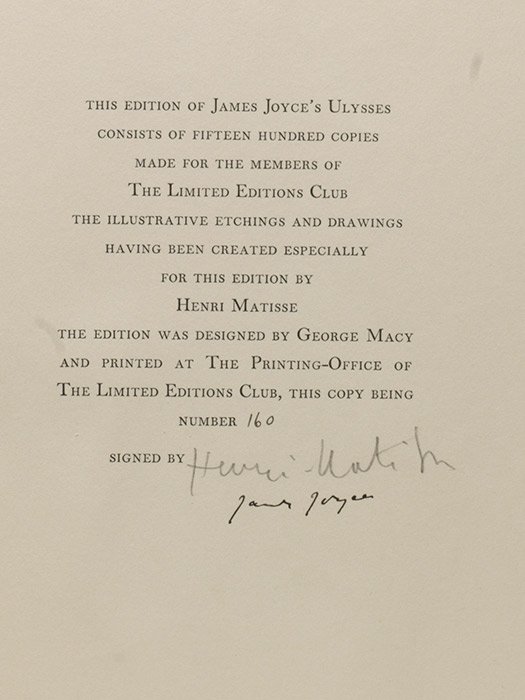 First illustrated edition of Joyce’s landmark Ulysses, number 160 of only 250 copies (from a total edition of 1500) signed by both James Joyce and Henri Matisse. (BRB 100757)

It’s a great story, right?  Just the right amount of intrigue and humor.  Alas, that’s not how things went down.

By most accounts, Joyce was certainly annoyed when he learned that Matisse hadn’t read Ulysses – in spite of having access to both the English and French editions – but from the project’s outset, the Irishman made clear he would only sign 250 copies.  Macy, whose payment to Joyce ultimately covered both permission to reprint Ulysses as well as those 250 signatures, agreed to the stipulation.  Furthermore, both Joyce and Macy knew of and approved Matisse’s Odyssey-based artwork long before the book went into production.  And while he initially worried that Matisse’s lack of exposure to Ireland would keep him from doing a credible job of the thing, Joyce was apparently happy enough with the results to buy several copies of the edition upon its release.  (It’s said that he even gifted a copy to his son and daughter-in-law that Christmas.)

80 years later, the LEC’s Ulysses remains one of the most arresting – and most collectible – artistic collaborations of the 20th century. 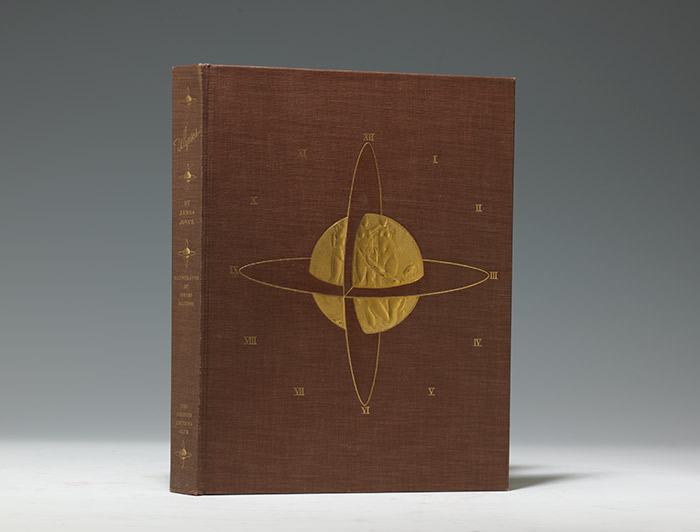