The Story Behind the First Sherlock Holmes Novel: A Study in Scarlet

In 1882, a young doctor waited for patients to arrive. To pass the time, he began writing short stories.

There was a time in my life which I divided among my patients and my literature…It is hard to say which suffered most.

Nevertheless he successfully sold a number of short stories—enough at least to retain his optimism in continuing the craft. After a few years he turned to the novel form.
His first novel-length manuscript was the largely autobiographical Narrative of John Smith, which he proudly sent off to a publisher for assessment. It was lost in the mail. He had only one copy.

His second novel, The Firm of the Girdlestone, was sent to multiple publishers (this time with multiple copies!) and immediately rejected. He shelved it.

Then in 1886 Conan Doyle introduced two new characters in a book he tentatively named A Tangled Skein. After little over a month of writing, his characters Sherrinford Holmes and Ormond Sacker had become Sherlock Holmes and Dr. Watson, and the book renamed A Study in Scarlet.
Conan Doyle famously took his inspiration for the iconic Holmes from an old teacher, Dr. Joseph Bell. Disarmingly humble about the association, Dr. Bell once remarked, “Dr. Conan Doyle has, by his imaginative genius, made a great deal out of very little.”

A Study in Scarlet was sent to four publishers before Conan Doyle received his first offer. It was not a flattering one—they offered to pay him £25 for the copyright, less than he had received for significantly shorter pieces in the past.
While the publication of Scarlet turned out to be rather unmemorable, folded into a one-shilling Christmas annual, the work did eventually reach publication in book -form. For those who love trivia, A Study in Scarlet has a good tidbit. The first printing in book form was illustrated with six pen-and-ink drawings by Conan Doyle’s father Charles Doyle—a talented artist who had been committed to a lunatic asylum by his family because of advanced alcoholism and epilepsy. According to Conan Doyle biographer Daniel Stashower, Charles Doyle spent his life believing himself unjustly confined.

Interestingly enough, Conan Doyle did not consider Scarlet the big breakthrough of this career. He argued, in fact, that the great turning point of his career came that same year when he wrote an English translation of a German article, “Testing Gas Pipes for Leakage.” It was the first time a publisher commissioned him to write a piece, rather than him approaching the publisher. It wasn’t until the 1889 that Conan Doyle was offered money up front for a Sherlock Holmes piece: the novel The Sign of Four. 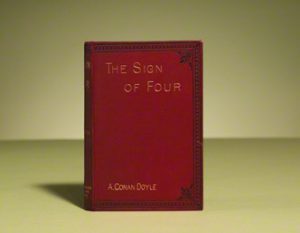 The first edition in book form of The Sign of Four.