The Story Behind the First Edition of Ulysses by James Joyce

The first edition of perhaps the greatest English book of the 20th century was published by a bookstore, in Paris, which had never printed a book before, and never would again.

That book is Ulysses, by James Joyce. And if it weren’t for an expatriate American woman living in France, Joyce perhaps would not have found a publisher.

Let’s start in 1905, when Joyce attempted to publish what would be his first major work, Dubliners. In the span of 9 years, he submitted it to 15 different publishers. They refused to print the work without major changes, fearing the (then quite powerful) censors. In fact, a London house had even agreed to publish the work as early as 1906—but the publisher’s own printer refused to set the type for one of the stories.  When the book finally did get printed, that entire edition was burned before reaching the public. 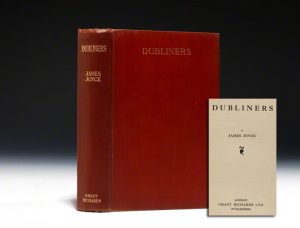 The 1914 first edition of Dubliners

Now to 1916, when Joyce attempted to publish his next major work, Portrait of the Artist as a Young Man. While it had been serialized in an avant-garde magazine prior to its publication as a book, Portrait was submitted to 12 different publishers. Once again, these publishers refused to print the book without major revision. 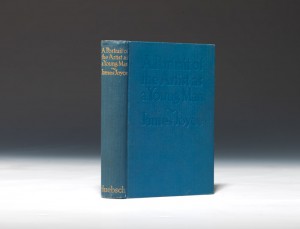 Next we arrive in 1918, and Ulysses. As with Portrait, Joyce’s masterpiece was serialized in an avant-garde magazine while Joyce searched for a publisher to print the piece in its entirety as a book. In this case, the Greenwich Village-based Little Review of Margaret Anderson and Jane Heap enthusiastically seized the opportunity to print the book serially after an introduction to the text by Ezra Pound.

This is the most beautiful thing we’ll ever have to publish. Let us print it if it’s the last effort of our lives!

In the fall of 1920, the head of the New York Society for the Suppression of Vice (yes, that was a real thing) had Anderson and Heap arrested for publishing obscenity.

They were defended by a well-meaning but obtuse lawyer, who stated during the trial, “I myself do not understand Ulysses; I think Joyce has carried his method too far.” Anderson and Heap were convicted.

Joyce was devastated, certain that no publisher would take the risk of printing a book already labeled obscene. And he was right. In the wake of the trial, it would be more than ten years before Joyce could find an American or English publishing house willing to publish his book.

Instead, the task fell to a personal friend who owned an English-language bookstore in Paris: Sylvia Beach. The thirty-something American woman had only opened her bookstore, Shakespeare and Company, two years before. Joyce met the “clever and energetic” Beach through—of course—Ezra Pound. Despite her lack of experience, Joyce and Beach came to an agreement that she would print this book, the masterpiece of the 20th century.

Finally, to 1922: The first edition of 1000 copies became available for sale. The book was printed in bright “Aegean” blue wrappers, to Joyce’s specifications. 750 copies were the normal issue; 150 copies were printed on a larger format, handmade paper; 100 copies were signed by Joyce. 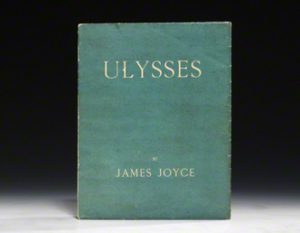 The first edition of Ulysses

Among the people who first purchased a copy were:

The edition of 1000 almost completely sold out within a month. Over the next ten years, perhaps thousands of copies were smuggled into the United States and England. According to Edward de Grazia,

The contraband article was transported across the seas and national borders in all sorts of cunning ways: in the bottom of hatboxes, hidden in underwear, stuck under the traveler’s waistcoat, even with the covers of the Bible pasted over it.

The book was not published with a typical binding. The Aegean blue wrappers were just that: paper wrappers. The book is incredibly thick, as well (as any reader quickly learns!). One complete read by someone not taking proper care could destroy that book.

Considering all that happened to Joyce’s book, seeing a first edition today feels like nothing short of a miracle.