The Story Behind Richard F. Burton’s Pilgrimage to Medina and Mecca

In the spring of 1853, noted linguist and explorer Richard Francis Burton started his most famous and important journey. Burton undertook the Muslim pilgrimage to Mecca and Medina, a trip that few Europeans knew anything about, and even fewer Europeans had ever undergone before. It would result in one of the greatest travel narratives ever written by an Englishman: Personal Narrative of a Pilgrimage to El-Medinah and Meccah (1855-56).

There was quite a bit of pride in such a dangerous undertaking for an intrepid explorer like Burton. Of the journey he said he wanted to “prove, by trial that what might be perilous to other travelers was safe to me.”

He started as a kind of “Persian prince” but soon settled on a dervish, a Sufi Muslim who lives an ascetic life dedicated to holiness. It was handy disguise, as dervishes could be of any social station, any age, from an (Muslim) country, and go anywhere they wished without questions from other Muslims. Eventually he created an elaborate backstory of an Afghan born in India and educated in Burma (to cover up any possible errors in his linguistic abilities with Arabic, Persian, or Hindustani).
Could Burton have visited Mecca as an Englishman converted to Islam, rather than in disguise? It probably would have been possible, but Burton did not want to take that path:

…my spirit could not bend to own myself…a renegade—to be pointed at and shunned and catechized, an object of suspicion to the many and of contempt for all.

Burton wanted to visit Mecca unremarked, as any other Muslim could.
When Burton first began his journey, it had been some time since he had last lived in a country with Muslim customs. He spent a month or so in Alexandria learning all over again the right ways to eat, drink, sit, sleep, and of course, pray. The tiniest misstep might be a betrayal—literally: the proper way to enter a mosque was with the right foot first. According to Burton’s account, most Muslims who ran into him thought he was certainly Muslim, but “not a good one like themselves, but, still better than nothing.”

One problem Burton faced during his journey was the difficulty in taking notes for his planned book. The people around him viewed taking notes as a “Frankish habit,” so taking notes could bring suspicion down on him. Burton took to carrying a case meant to hold a small Quran and snuck an empty notebook in it instead.

His journey wasn’t without some mistakes. In Cairo, Burton exchanged drinks with an Albanian soldier after a small altercation. However the drinks got a bit out of hand and the soldier caused a major ruckus, drawing attention and shame upon the “Indian doctor.” He had drunk something forbidden to practicing Muslims, and word got around. Burton slunk away from Cairo at his first opportunity. (Burton continued to drink on his pilgrimage, but only secretly.) 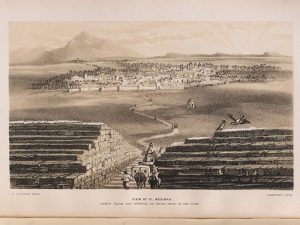 Burton first visited Medina, the location of the Prophet Mohammad’s tomb. In Burton’s day so little of Muslim culture had been correctly communicated to Europeans that many still believed Mohammad’s tomb was actually in Mecca. Burton was now a Zair, a pilgrim who had visited Medina. (The pilgrimage to Mecca would make him a haji.)

Always on the lookout for content scandalous to Victorian sensibilities, one of Burton’s interests in Medina was the practice of female circumcision. Though Burton wrote about it extensively in his Pilgrimage, his editor deleted most of these passages as “unpleasant garbage.” 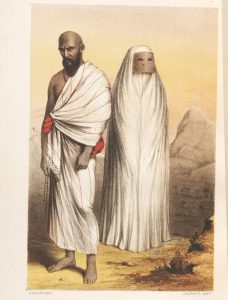 An image from Burton’s Pilgrimage

Although Burton felt his trip to Medina somewhat underwhelming, Mecca and the Ka’aba (one of the most sacred sites of Islam) did not disappoint. “Few Moslems contemplate for the first time the Ka’abah, without fear and awe,” Burton noted. He followed all the proper steps of the pilgrimage—distracted every now and then, in true Burton style, by some exotic young beauty—and finally became qualified to wear the green turban of a haji.

Then it was back towards home. He appeared at the door of the British consul in Jeddah—whose doorman refused to admit him, as he was still dressed as an Arab. Burton had to send in a note that he was “an officer of the Indian army,” which led to a considerable amount of surprise, but a warm welcome.

His return to London brought mixed reactions. Englanders took pride in him as a bold British traveler. However when Muslims received word of Burton’s successful trip, many viewed it as blasphemy. Among Europeans, Burton continued wearing Arab dress and otherwise keeping up controversial (in their minds) Muslim practices. 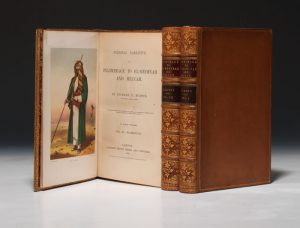 A first edition of Burton’s Personal Narrative of a Pilgrimage to El-Medinah and Meccah, with a frontispiece portrait of Burton in Arab dress

Bold and controversial: two appropriate adjectives for Burton and his career. His Pilgrimage encompasses both of these perhaps more than any of his other works. Mixed with the keen eye of an anthropological observer and the passion of a man in love with the culture, his book stands as a triumph in the field.