Timlin: The Ship that Sailed to Mars

It is a truth universally acknowledged that people who work in a rare book gallery are nerds. Over time, this nerdiness is inexorably expanded – or exacerbated, depending on your point of view – by our exposure to the books.

What this means is that we get excited about weird things. And by excited, I mean seriously excited. We’re talking seal-clapping exuberance over a dust jacket (as in the first time I saw a first edition of Hemingway’s Death in the Afternoon) or a small photograph (as in the signed vintage carte-de-visite of Robert E. Lee currently on display at our Las Vegas gallery). 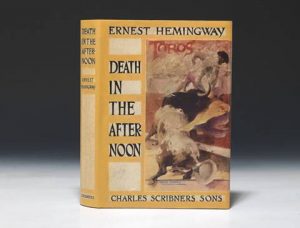 1932 first edition, first issue of Death in the Afternoon 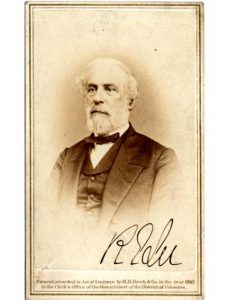 What this also means is sometimes that excitement evolves into outright obsession. Because who knew that the publication history of Darwin’s On the Origin of Species was so fascinating?  Or that polar explorers were such lunatics? Or that some of the most beautiful books published in the 20th century are stories you’ve never read, illustrated by people you’ve never heard of? 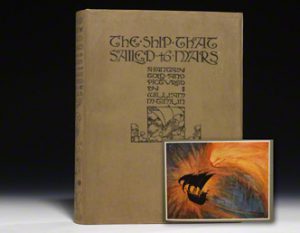 1923 first edition of The Ship that Sailed to Mars in the original dust jacket. Inset: The Meteor.

The Ship that Sailed to Mars is one of those stories, and William Timlin is one of those people. Published in England in 1923 in an edition of only 2000 copies – a mere 250 of which were made available in America – The Ship that Sailed to Mars contains 48 color plates, which alternate with 48 pages of Timlin’s own calligraphic text. It’s the story of an Old Man who has long dreamed of sailing to Mars “by way of the Moon and the more friendly planets.” 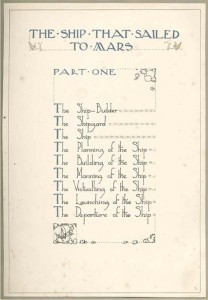 Table of Contents. The story goes that the publishers were so pleased with the balance between the illustrations and the text that they decided to print the book without any type-setting.

So, the Old Man sets about designing and building a ship. Helping him are several crones, the Elf King’s best metal-worker, and fairies. Lots of fairies. Naturally.  They suffer through failed designs and false starts.  They debate how many cabins the ship should have and what food they should bring.  They select gifts for the fairies they will meet on Mars, for “they have known from oldest times that on Mars there dwell those Fairies who fled the Moon when that unhappy planet cooled from sunny opulence to clearest shimmering ice.”  Until at last the Ship is a reality – one made of lightweight wood “from the grove of a friendly gnome” and decorated with carved golden plates and ropes of sapphires, diamonds, rubies, and amethysts, with peacock hangings, rose silks, and a gleaming figurehead in the form of a phoenix.  They set sail at sunset.

Along the way the Ship and her crew encounter all manner of creatures – both terrifying and lovely.  Primordial monsters, sinister storms, Eden’s own serpent with jewels for eyes.  Benevolent air sprites, constellations come to life, Greek myths, and a planet populated entirely by pirates.

Until at last, “through an opportune gap in the encircling stars,” they spy “the tiny Orb that was the Wonder World of Mars.”  Upon landing, the Old Man and his companions meet with a warm welcome.  They are wined and dined and toured through the city.

Of course, no Fairy City is complete without a Princess.  And every Princess needs a champion to complete an impossible task.  Who better than the Old Man from Earth?

Indeed, the Old Man must once again take his life in his hands by traveling through the Iron Hills to the Thunder City. Once there, he must rescue the Prince (beloved of the Princess) who has sadly fallen prey to the Misery peculiar to that region.

It doesn’t spoil the loveliness of the specifics to say that the Old Man succeeds – after a fashion.

It seems small in the face of Timlin’s art, but what I love most about The Ship that Sailed to Mars is the ship itself, the fact that it’s an old-fashioned sailing ship rather than a fantastical rocket ship.

It’s worth noting that Timlin was born in 1892 in a coal-mining town called Ashington, which sits along the North Sea in Northumberland, England’s northernmost county.  (Shortly before the outbreak of World War I, Timlin’s family emigrated to South Africa, where he went on to become a successful architect and artist.) Having grown up at the water’s edge myself, I know how much time you spend watching ships go by, how prominently those ships can figure in a child’s imagination – and how they linger, even into adulthood.

As one of my colleagues, who was also raised along an English coast, said: “Living on the sea, you come to the edge of civilization… you can go anywhere.”  Even Mars.