The Radical Roots of Gulliver’s Travels

Swift has sailed into his rest;
Savage indignation there
Cannot lacerate his breast.
Imitate him if you dare,
World-besotted traveller; he
Served human liberty.

On the day for the feast of St. Patrick, it might be appropriate to remember the Dean of his namesake Cathedral.
During the short-lived Tory government during the reign of Queen Anne, Swift was intimate with the leading Tory ministers, Harley and St. John. As editor of the Examiner magazine, he defended Tory policies and attacked the Whigs, led by Earl Godolphin and the Duke of Marlborough. Swift expected a promotion as a Bishop after his service to his party, but alas, Queen Anne disliked him. Instead, in 1713 he was left with the Deanship of St. Patrick’s Cathedral in his motherland, where he wrote and published—anonymously—his classic, Gulliver’s Travels. 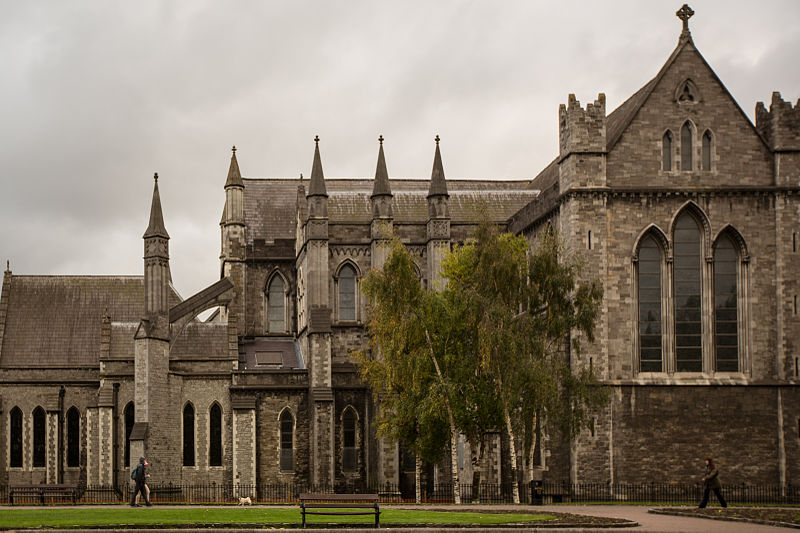 However, before completing his famous tale, the political climate would once again place him back in the limelight, this time as an advocate for the Irish citizens’ suffering from English oppression. At this time Ireland had become more and more economically dependent on England through laws enacted in Parliament. Things came to a crucial head when the patent of coinage for Ireland was awarded without consultation of the Irish. Swift reacted by anonymously publishing the Drapier Letters.

The Drapier Letters were widely read throughout the country due to his decision to write them in a manner that merchants and shopkeepers alike could comprehend. Swift wrote a total of seven Letters. It was in the fourth, “To the Whole People of Ireland,” where he wrote one of his more marked passages:

… by the laws of God, of Nature, of Nations, and of your Country, you are, and ought to be, as free a people as your brethren in England.

In The Letters, the Irish found their patriot who finally publicly voiced their grievances. The English government, on the other hand, did not take well to what they saw as rabble-rousing. They felt so discomfited that they threw the printer of The Letters, John Harding, into prison and placed a bounty on Drapier’s head.* Swift succeeded in his campaign, and Wood’s patent was withdrawn in 1725.

Shortly thereafter, the culmination of Swift’s career was to be released in what Maynard Mack argues is “one of the most devastating assaults on human pretenses and pride ever written” (Burt 158). This time, the audience was not just one person, or members of government, but instead all of humankind. This is, of course, Gulliver’s Travels, first published as Travels into Several Remote Nations of the World by one Lemuel Gulliver. 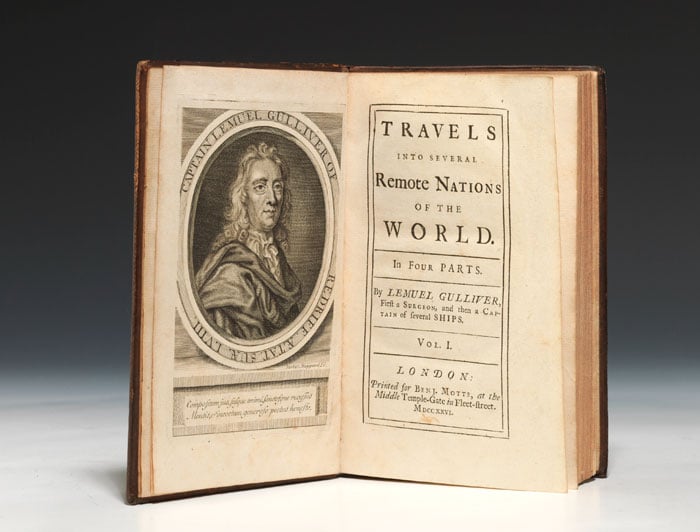 Published pseudonymously – in fact, the publisher, Benjamin Motte, did not know the true identity of the author – the work was viewed as potentially dangerous. Motte edited the work and cut out some of the more provocative passages. After the emendations were made, Gulliver’s Travels was published on October 28th, 1726. John Gay wrote to Swift that “the whole of the first impression sold in a week.” A second issue was released in mid-November and a third issue in December.

Readers of all kinds were enthralled with the inventiveness of the author of this wholly original work. They were transported from Lilliput to Brobdingnag to Laputa. The popularity of Gulliver’s Travels would soon reach other countries. It was at the time of the work’s publication that Voltaire was visiting England. One of the leaders of what would be the Enlightenment spread the work to his French correspondents and personally recommended a French translation be produced. 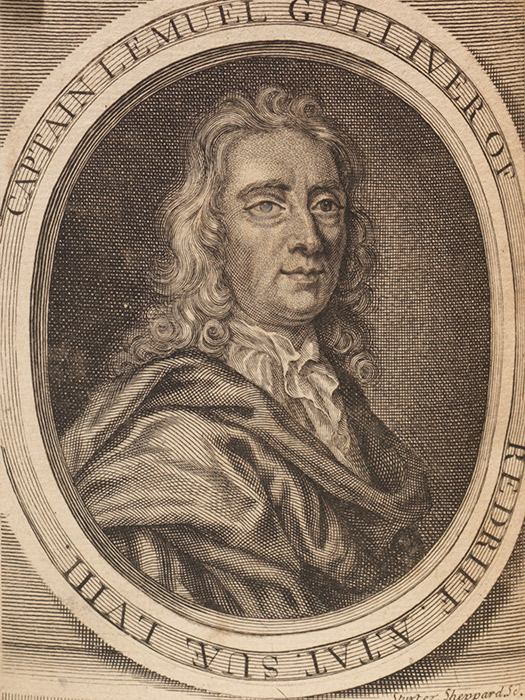 Frontispiece portrait of Gulliver in the second issue. (BRB 91646)

To this day, it remains a classic in children’s literature – an interesting result for a piece that William Makepeace Thackeray thought “[tore] down all shreds of modesty, [was] past all sense of manliness and shame; filthy in world, filthy in thought, furious, raging, [and] obscene.”

Nevertheless, Gulliver’s Travels was Swift’s crowning achievement and one of the classics that everyone should read. Swift should be remembered for many things though – as scathing political pamphleteer, to a staunch advocate of Irish interest, to a vicious satirist (as seen in one of my favorites, A Modest Proposal).

It’s only fair to allow the Dean a few final words:

Perhaps I may allow, the Dean
Had too much satire in his vein;
And seem’d determin’d not to starve it,
Because no age could more deserve it.
Yet malice never was his aim;
He lash’d the vice, but spar’d the name;
No individual could resent,
Where thousands equally were meant.

—Verses on the Death of Dr. Swift, composed by Swift

*While John Harding was in jail, there are stories of Swift’s visits to the printer in disguise. At the trial of Harding, Swift addressed the grand jury and swayed them to bring a verdict of ignoramus, thus releasing Harding.