The Story Behind Frankenstein; Or the Modern Prometheus

A stormy evening closes in on a villa not far from Lake Geneva. The group of friends gathered there read ghost stories to pass the time. Inspired by these tales of the supernatural, one member of the group proposes a challenge to the others: to write their own horror stories.

Sounds like the makings of a scary movie, right?

Now realize it is 1816 and the challenger is none other than Lord Byron, that this group of friends includes Mary Shelley, Percy Bysshe Shelley and Byron’s physician, Dr. John Polidori, and that from this night will come a number of tales of terror, the most famous being the horror masterpiece Frankenstein.*

Frankenstein; Or the Modern Prometheus, first published in 1818, is more than just the story that would give us the classic 1931 movie that, in itself, became the inspiration for many a costume for future generations. It is cited as a progenitor to the modern science fiction genre and a landmark in literature. And yet for five years after its initial publication in 1818, it was seen as a mystifying novel by an unnamed author. 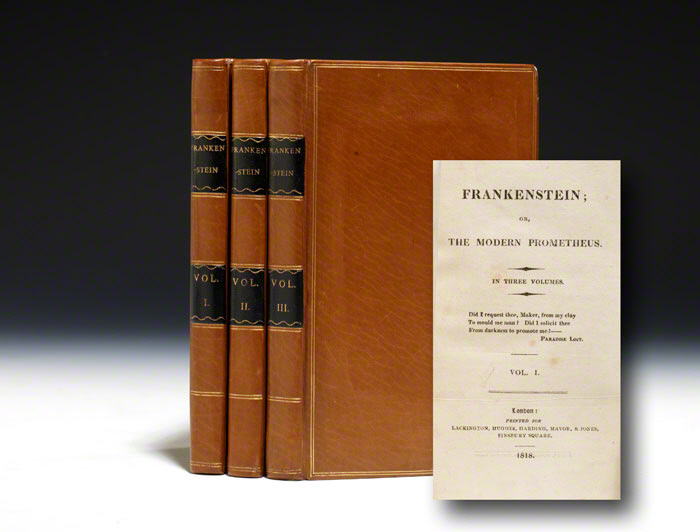 The work received mixed reviews: from being described as a “disgusting absurdity” to, in the words of Walter Scott, a “work [that] impresses us with a high idea of the author’s original genius and happy power of expression.”

There were suspicions as to who the author of such a frightening tale could be (including Percy), but in 1823 a second edition was published and the author was revealed as Mary Wollstonecraft Shelley, Percy’s wife.

Incredulity persisted because “How can…a young girl, [come] to think of, and to dilate upon, so very hideous an idea?” Disbelief was so strong as to lead Mary to address this in the introduction of the third edition of Frankenstein, published in 1831. 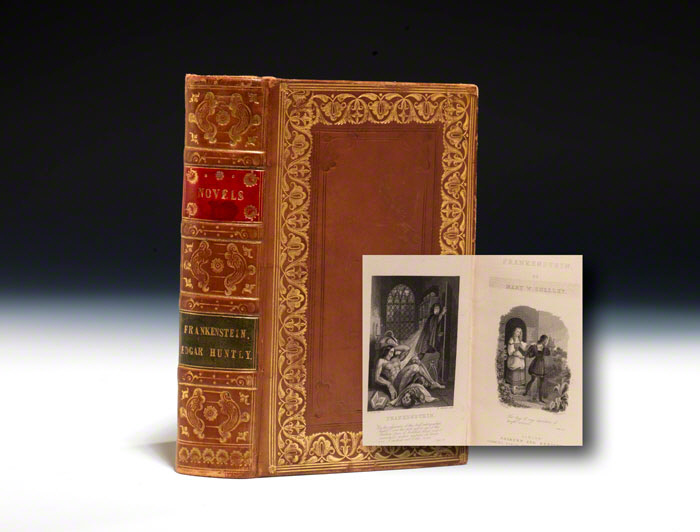 Third edition, the first with Shelley’s own revisions and introduction, prepared especially for this edition, relating the circumstances surrounding the writing of the novel; and the first illustrated edition. (BRB #76107)

She wrote that upon Byron’s challenge that night she “busied [herself] to think of a story … to rival those which had excited us.” She fell short, and every morning when asked, she admitted that she did not have a one to share.

However Mary was no ordinary girl. She was the daughter of two literary celebrities – her mother, Mary Wollstonecraft (the women’s rights activist who famously authored Vindication of The Rights of Woman) and her father, William Godwin (a noted radical, philosopher and novelist). She enjoyed (and sometimes endured) an unusually creative and educated childhood.

And one rousing conversation between Percy and Byron finally caught her imagination. The two were discussing the recent experiments of Dr. Erasmus Darwin (the grandfather of Charles Darwin) when the conversation digressed to the possibility of reanimating a human corpse. As Mary settled to sleep that night she was awoken by a vivid and terrifying image in her dream – “a pale student of unhallowed arts kneeling beside the thing he had put together. . .   he opens his eyes; behold the horrid thing stands at his bedside, opening his curtains, and looking on him with yellow, watery, but speculative eyes.”

“I have found it! What terrified me will terrify others”

In creating Frankenstein, Shelley reimagined and updated the myth of Prometheus from the work of Homer and plays by Aeschylus and Plato. She introduced the notion that human creative genius can create miracles, but that these miracles can also turn on man, and even lead to his destruction. Victor Frankenstein is Faust all over again, striving to use the human mind to achieve power. But this time, not only is just a soul lost in the quest for power, there is also the threat of the destruction of human society. Since then, “You are my creator, but I am your master” has served as the most powerful metaphor for science out of control.

Shelley’s novel has been confidently categorized as a “gothic romance.”  But she did more; she created the basic science fiction formula. When H.G. Wells peopled the future with Morlocks in The Time Traveler or Emile Zola imagined the ticking time bomb of miners in Germinal, they were picking up and carrying on the torch lit before by Mary Shelley.

However, creating a new genre is only one of the most remarkable features of the story. What is wonderful and amazing is that this woman, barely more than a well educated girl, created a tale that was imaginative and terrifying as well as prescient and morally profound.

(*) From this challenge, John Polidori would also publish Vampyre – the first vampire story in English literature. Percy would publish Prometheus Unbound, which, very much in the spirit of Romanticism, celebrates Prometheus who in Greek legend defied Zeus and brought the fire (of creative genius, so the Greeks believed) to humans.

Watch the trailer for the 1931 film production of Frankenstein, which created the image of the monster that continues to inspire to this day.