The Story Behind the Creation of the Oxford English Dictionary

Once or twice during my academic years I was accused of reading the dictionary. Although untrue, I’ll admit I have skimmed a page or two upon occasion; I do readily look up the meaning of unfamiliar words, and I did ask, and receive, a copy of the Compact Edition of the Oxford English Dictionary (with reading glass) when graduating with my MA.

I guess there is some personal fascination with the dictionary, but who doesn’t appreciate a well-chosen word, a lovely turn of phrase, or the etymology of an interesting term?

In 1928, when the first edition of the Oxford English Dictionary (OED) was finally completed after a little over seventy years, British Prime Minister Stanley Baldwin began his toast with the remark that if he were lost on a deserted island, he would choose the OED for company because, “Our history, our novels, our poems, our plays — they are all in this one book.” I fully agree.

The OED sprang as an idea in 1857 from several members of the Philological Society in London. They felt that the current dictionaries were not comprehensive or accurate enough. An ideal dictionary would contain all obsolete words, all families and groups of words, accurate documenting of the earliest appearance of the words, detailed meanings and senses of words, and all literature had to be read and scanned for illustrations of these meanings. To sum it up, the best dictionary needed to contain the meaning of everything.

That is quite a request. Monumental, indeed.

The illustrative quotes are the essence of the OED; these reveal the history and usage of the language through the centuries. But, how was all literature to be read, all the words listed, and the earliest appearances found? By making a call to the public, asking for volunteers around the English-speaking world “to read and extract” quotations from various books. The dictionary was for the people, so why not have them help research it? And they did. Ultimately, more than 800 readers responded with their assistance.

Besides these readers, the OED required the work of many others: sorters, sub-editors, assistant editors, editors, compositors, printers, proofreaders, professional authorities, delegates, and Oxford deans. The poets Tennyson and Browning were consulted about the meaning of words that appeared in their poems. J.R.R. Tolkien was an assistant lexicographer for one year, 1919. No less than six editors guided the process, with the bulk done by James Murray. Even several of Murray’s children helped through the years.

This gargantuan project required a lot of paper, man-hours and time. Here are some dizzying facts about the 10-volume first complete edition of the OED: 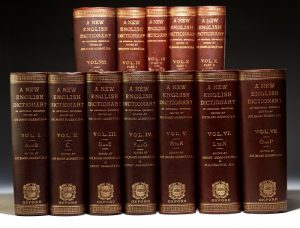 The 10-volume (here bound in 12) complete first edition set of the OED.