The Story Behind A Christmas Carol by Charles Dickens

…how he wept over it, and laughed and wept again…how he walked thinking of it fifteen and twenty miles about the black streets of London, and many a night after all sober folks had gone to bed. And when it was done…he let himself loose like a madman.

–John Forster, Life of Dickens, the first biography of Charles Dickens
Sometimes I think we readers don’t understand all the blood, toil, and soul that go into creating a book. We read the final product and assume it sprang, Athena-like, fully formed and perfect from the creator’s head. But one of the most influential works of English literature actually appeared through the blackness and kinetic fire of despair: A Christmas Carol, by Charles Dickens. 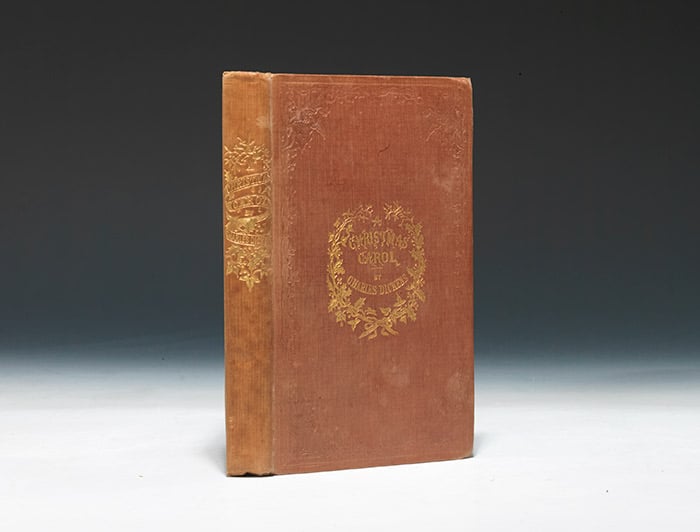 At the time he sat down to write his ‘slender volume,’ Dickens’s once unequaled popularity was at a nadir, his critical reputation in a shambles, his bank account overdrawn.
Faced with bankruptcy, he was contemplating giving up writing altogether. Instead, he pulled himself together and, in six short weeks, wrote a book that not only restored him in the eyes of the public but began the transformation of what was then a second-tier holiday into the most significant celebration of the Christian calendar.

Indeed, in Standiford’s excellent book The Man Who Invented Christmas I recently learned that before the mid-19th century, Christmas did not tower over all the other Christian holidays. In fact, it was a somewhat minor holiday: not nearly as big as Easter, but somewhat closer to Memorial Day. 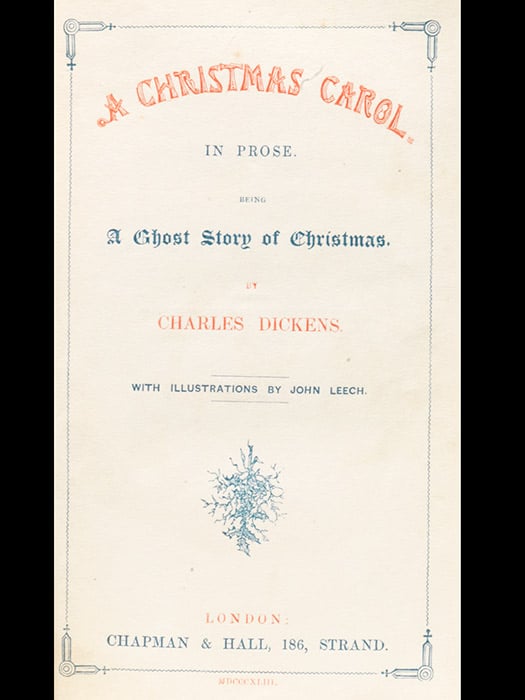 The title page of the first edition, first issue A Christmas Carol.

In a move that has been repeated a frightening number of times in the history of the book—and which gives hope to struggling authors everywhere—Dickens’s publisher Chapman and Hall actually refused initially to take on this now-classic of English literature. Dickens was in the midst of producing Martin Chuzzlewit in parts (like all his previous novels). It was shaping up to be an utter failure. His publisher wasn’t interested in running off to produce a deluxe gift book for a holiday that hardly mattered. They didn’t want to risk any more money on Dickens at the moment.

Little did they know that Carol would create not only a gigantic Christmas book market, but change the popular understanding of Christmas forever.
Let us all thank the Muses that while Chapman and Hall didn’t believe in the idea of a Christmas book, Charles Dickens did. He decided to pay for the production himself, despite the fact that he was struggling financially. He was certain it would be a major success, and he treated the production of the book as such. A beautiful little volume it is, the only Dickens first edition to feature hand-colored plates. 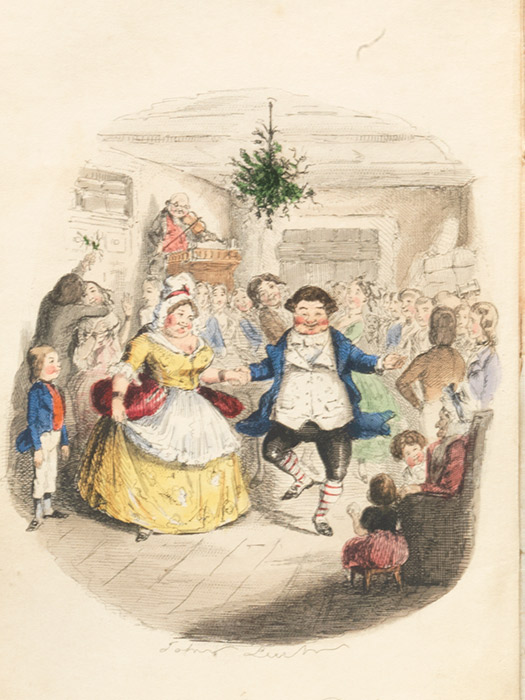 The hand-colored frontispiece illustration of the first edition.

Dickens collectors know that the author enforced high standards on the finished product. After receiving a few trial copies, Dickens continued to make major changes to the physical book. Unhappy with the green titles and endpapers, he requested both be changed (to blue and yellow, respectively). Trial copies of A Christmas Carol, with the green half-title and other points, do periodically appear and are much valued by collectors. In any case, one of the 6000 copies first published on December 19th, 1843, is extremely rare. Not only did the entire run sell out in a single day, but this well-loved and fragile book is extremely difficult to find in beautiful condition. 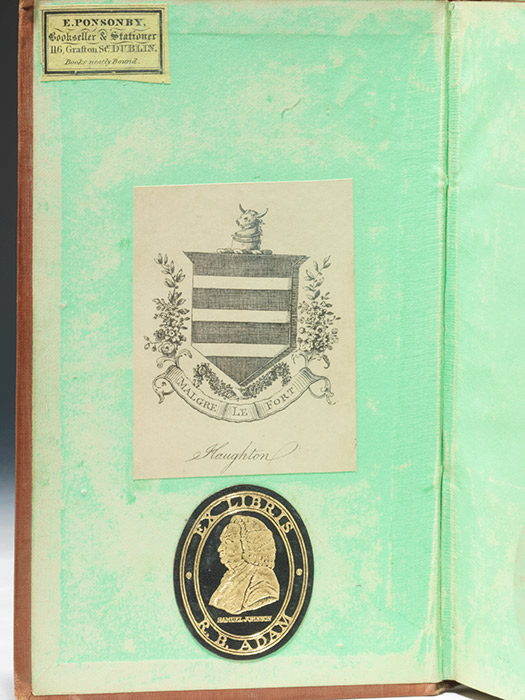 A shot of the green endpapers that Dickens disliked because the color had a tendency to rub off.

Dickens had a vision, and it was consuming him. He turned down invitations from friends (including the famous illustrator George Cruickshank). To one he wrote, “Your note found me in the full passion of a roaring Christmas scene.”  This vision took such a singular hold on his mind that the book was finished in just six weeks. He wrote to another friend:

I believe I have written a tremendous Book; and knocked the Carol out of the field. It will make a great uproar, I have no doubt.