The French folktale of a murderous nobleman called Bluebeard had been around for the better part of two centuries by the time Charles Perrault published his version in Histoires ou Contes du Temps Passe in 1697.

There’s some debate, but most agree that the tale is based – at least in part – on Baron Gilles de Rais, a 15th-century Breton knight.*  Publicly, he was a wealthy war hero, who served alongside Joan of Arc in the French army during the Hundred Years’ War.  Privately, he was a prolific abuser and murderer of children.  Even among stories of the depraved, this guy stands out. 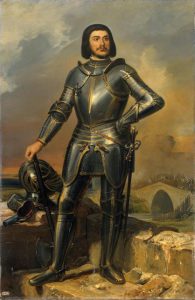 It makes a kind of sense then that such evil would become the basis for a fairytale boogieman. 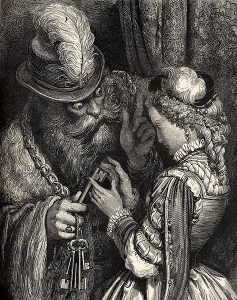 Bluebeard as illustrated by Gustave Doré

The tale, in case you’re not already familiar, involves a wealthy man called Bluebeard, his reluctant young wife, and a locked room that he forbids her from entering.  Unable to stave off her curiosity, the young wife waits until her husband is away and then opens the room.  She discovers the dead bodies of Bluebeard’s previous wives.

When he learns that his wife has opened the room, Bluebeard flies into a rage and attempts to behead her.  The wife delays her execution with some Scheherazade-style “final prayers,” and at the last minute, her brothers burst through the door and dispatch Bluebeard posthaste. 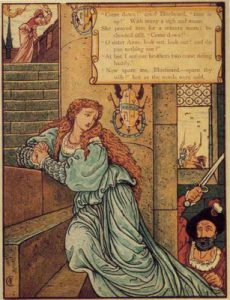 Bluebeard as illustrated by Walter Crane

Because the tale can so easily be read as a matter of masculine authority versus a (seeming) lack of feminine agency, many of the retellings – especially in the 20th century – revolve around the idea of power.  Who’s got it and/or who’s taking it?  In these versions, a woman is usually the savior – the wife herself, a mother, a sister.  Among my favorite of these retellings is Angela Carter’s ridiculously well-written short story, “The Bloody Chamber.”

For me, the most compelling reimagining of Bluebeard, however, comes in the form of a sonnet written by Edna St. Vincent Millay.  (Originally published as “Sonnet VI” in 1917’s Renascence and Other Poems, the poem is now most often listed simply as “Bluebeard.”)

This door you might not open, and you did;

So enter now, and see for what slight thing

You are betrayed… Here is no treasure hid,

No cauldron, no clear crystal mirroring

The sought-for Truth, no heads of women slain

But only what you see… Look yet again:

An empty room, cobwebbed and comfortless.

Yet this alone out of my life I kept

Unto myself, lest any know me quite;

And you did so profane me when you crept

Unto the threshold of this room tonight

That I must never more behold your face.

This now is yours.  I seek another place. 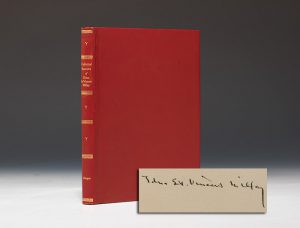 If ever you were looking for an example of literature and art’s power to transform, here it is.  In a mere 14 lines, Millay manages not only to make Bluebeard a sympathetic character, but she also undoes (if only temporarily) more than five centuries of villainy. 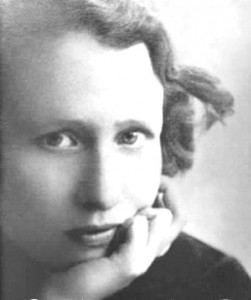 What about you?  Any favorite retellings of classic tales?

*Many scholars also cite Conomor the Accursed, a 6th-century Breton king known for his cruelty, as an inspiration for the tale of Bluebeard.  Conomor was in the habit of beheading his wives when they became pregnant.