Poems Chiefly in the Scottish Dialect by Robert Burns: The Kilmarnock Edition

It’s hard to imagine New Year’s without this song and more difficult to imagine a Scotland without its beloved bard, Robert Burns. Stumbling into a Rabbie Burns-inspired pub on Edinburgh’s Royal Mile or “gathering the clans” for poetry, music and drink on Burns night every January seems natural, even inevitable, nowadays. Yet it is historical fact that Burns came astonishingly close to never becoming Scotland’s poet laureate, or, indeed a well known poet at all. Before he had ever published a single line of verse, Burns’ intention had been to move to Jamaica as a form of self-imposed exile to escape financial and personal woes.

Burns was born and grew up in rural Scotland where his parents, despite being only tenant farmers, ensured their children received an education. Poetry and literature became passions for Burns, as did his attraction to the opposite sex, drink and nature. In 1785, he decided to leave the shores of his native land and travel to the West Indies both for financial profit  and to run away with one of his bonnie love interests at the time, Highland Mary (Mary Campbell).

He planned to take up the post of a bookkeeper at a plantation in Jamaica, but did not have enough money to make the passage to the New World. In an effort to help procure the funds for a departure the following year, a friend suggested Burns publish his collection of poems and sell them by subscription. Without much hope they’d be a success, Burns nevertheless found a local publisher by the name of John Wilson in Kilmarnock and on July 31, 1786, 612 copies of Poems Chiefly in the Scottish Dialect were sold for 3 shillings each.

The work acts as love letter to his native land written from a unique perspective that is humbled by its way of life, but also graced with a manner that is today appreciated by scholars and far flung cultures alike.

At the time of publication however, Burns was unsure of his poems’ reception. In the preface he expressed his hesitation on its release to the public.

Now that he appears in public character of an Author, he does it with fear and trembling. So dear is fame to the rhyming tribe, that even he, an obscure, nameless Bard, shrinks aghast at the thought of being branded as–an impertinent blockhead, obtruding his nonsense on the world; and because he can make a shift to jingle a few doggerel Scotch rhymes together, looks upon himself as a poet of no small consequence, forsooth!

He ends thanking his subscribers with, “…not a mercenary bow over a counter, but the heart-throbbing gratitude of the Bard.”

Burns need not have been so fearful because success was both immediate and massive, bolstered by the support of his family, friends and patrons. All 612 copies of the Kilmarnock edition were sold within a month. He quickly became known throughout the country.

Despite his popularity however, personal turmoil created by the impending birth of an illegitimate child by another belle, Jean Armour (whom Burns eventually married in 1788) made him continue with his plans to go to Jamaica. Fortunately for us, he received a letter from another Scottish luminary of that time, Dr. Thomas Blacklock, who encouraged, if not implored, Burns to stay in Scotland and to come to Edinburgh to publish an enlarged second edition of his work.

Upon receiving the letter Burns stated,

I had taken the last farewell of my friends; my chest was on the road to Greenock; I had composed my last song I should ever measure in Caledonia… when a letter from Dr. Blacklock to a friend of mine overthrew all my schemes by rousing my poetic ambition. The Doctor belonged to a set of Critics for whose applause I had not even dared to hope. His idea that I would meet with every encouragement for a second edition fired me so much that away I posted to Edinburgh without a single acquaintance in town.

In Edinburgh Burns found a publisher, William Creech, who agreed to publish an enlarged second edition and first Edinburgh edition. For this edition Creech commissioned artist Alexander Nasmyth to paint the oval bust length portrait of Burns, now housed in the Scottish National Portrait Gallery.  With this edition, Burns established his reputation as the poet laureate of Scotland and continued to write poems and songs such as “Tam O’Shanter” and “Auld Lang Syne.”

He also continued to live a cavalier life. After spending most of the wealth from his published works, he began a position as an Excise Officer in Dumfries. On July 21, 1796, at the young age of 37, Burns died.

Ernest Hemingway once said of Miro’s The Farm that, “It has in it all that you feel about Spain when you are there and all that you feel when you are away and cannot go there. No one else has been able to paint these two very opposing things.” Perhaps Hemingway is right in that no one could paint these “two very opposing things,” but I’d assert Burns was able to capture these sensibilities within his verse. When visiting Stirling Castle his words can still thrill the spirit with the opening stanzas of “Robert Bruce’s March to Bannockburn”:

At a Burns’ night celebration, abroad as well as home, one shares different emotions, but just as poignant and intense.  The songs and poems still enter my mind as a kind of background music when I think of my fond memories from my time there studying at the University of Edinburgh and campaigning for the Scottish National Party as an intern.

Much more can be said about Burns–he was a fervent romantic, a social and political radical, a cocky lyricist with a sense of humor, a ploughman who appreciated the common speech of his people and knew how to make it sing. With his multitude of characteristics, each person can find something to admire. This is his legacy that all started with Poems Chiefly in the Scottish Dialect published in Kilmarnock–a legacy that would not exist without the recognition and support of his countrymen, who deterred him from leaving the land that loves him to this day. 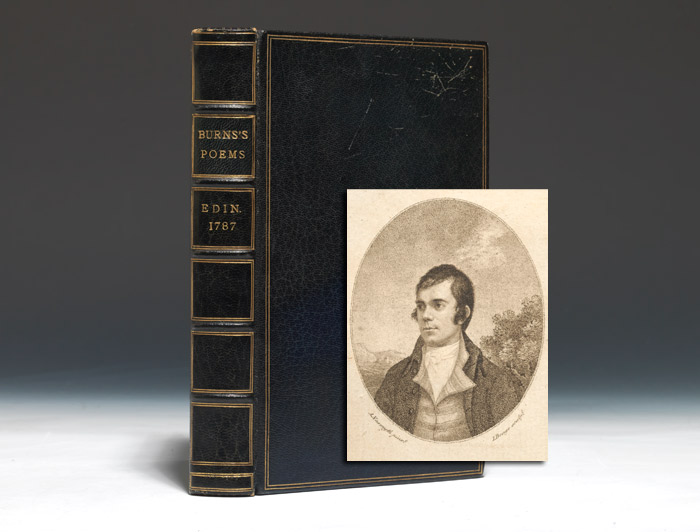 First Edinburgh edition of the work, which established Burns as the national poet of Scotland.