Kay Nielsen’s East of the Sun, West of the Moon

Nearly all fairy tales start the same way: Once upon a time.  There are plenty of variations on this theme, of course. Personally, I like: In a time when wishing still helped. But ultimately, it’s all the same.  And, unless you’re reading the tales as they originally appeared, happily ever after is generally a foregone conclusion.*

But once you venture beyond the traditional Western canon, stories tend to go a bit sideways – in a good way.  Allow me to introduce to you East of the Sun, West of the Moon, a collection of 15 tales published in 1914 with illustrations by the inestimable Kay Nielsen.  Culled from ancient Norse folk tales, they were originally translated from the Norwegian in the mid-19th century by Peter C. Asbjörnsen and Jörgen Moe. 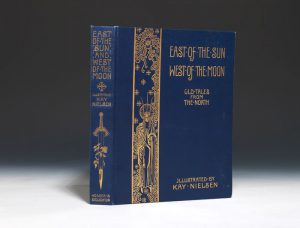 First trade edition of East of the Sun, West of the Moon. Hodder & Stoughton, 1914.

There’s something of the uncanny in these “old tales from the North.”  The familiar is made strange, or else the strange is made familiar. Each story begins with Once upon a time, but from there they quickly delve into characters and landscapes that are as alien to me as the surface of Mars.  There are Princes and Princesses and Evil Queens, sure.  But there is also a Lindworm who eats his brides (plural), a Giant who hides his heart in a duck’s egg, and the Virgin Mary who acts as a very, very stern Godmother.

Ultimately, what truly sets the book apart is Nielsen’s art.  In fact, the Dane’s well-deserved reputation as one of the leading figures of the Golden Age of Illustration is based largely on his work in East of the Sun, West of the Moon.  The illustrations range from melancholy to soothing, from unsettling to funny – but above all, they are beautiful.  So beautiful, in fact, that they often overshadow the stories themselves.

Nielsen’s work is markedly influenced by the art of China and Japan.  His grandfather, a diplomat of sorts, was an avid collector and introduced a young Kay (pronounced “Kai”) to those artistic traditions.  It’s easy to see in the asymmetrical use of space, the smooth angularity of line, the deft and purposeful placement of the most delicate details.  Nielsen’s style also owes much to Aubrey Beardsley – the unfortunately young-lived, if hugely influential, Victorian illustrator – as well as the Art Noveau movement.

I’ve always been a “book person,” but it wasn’t until 5-6 years ago that I began collecting in a true sense.  What lead me down the primrose path, you might ask?  It was the first time I encountered a copy of East of the Sun, West of the Moon.  So go, go right now, and lay hands on a copy of this book.  Just remember that you’ve been warned: It’s a gateway book.

*Many of the original versions of classic fairy tales are far bleaker than you’ve been lead to believe. In Hans Christian Andersen’s Little Mermaid, our girl can only go ashore by drinking a Sea Witch’s potion that makes it feel as if she’s walking on knives with each step.  But it’s ok, right?  Love, they say, requires sacrifice.  The constant physical pain will be ameliorated by the presence of her true love.  Right?  Alas, alack, no.  Not even a little bit.  The Prince marries another, and the Mermaid throws herself in the sea, where she dissolves into sea foam.