Gustave Doré: The Rime of the Ancient Mariner

In the mid- to late-19th century, there emerged a publishing practice of “gift books.”  These editions were elaborately bound and often extensively illustrated.  Usually published in the fall – with an eye towards the holiday season – gift books collected short fiction, poetry, and essays from popular authors.  Edgar Allan Poe’s “The Pit and the Pendulum,” for instance, first appeared in such a volume. 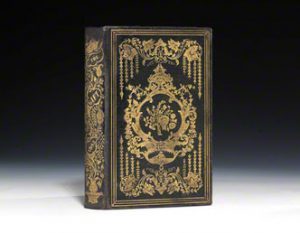 First edition of The Gift. First appearance of Poe’s “The Pit and the Pendulum.” Carey & Hart, 1843.

Dovetailing with the gift book tradition was an increased demand for illustrated editions of classic literary works – The Inferno, Paradise Lost, Don Quixote, Morte d’ Arthur to name only a few of the more popular.

French illustrator and engraver Gustave Doré (“Dor-ray”) stands as one of the most successful book artists from this period.  The most sought-after of his illustrated editions include Dante, Milton, Tennyson, Poe, Coleridge, and the Bible.  And while there are varying opinions as to which is his best work, I’m going with his illustrations for Coleridge’s Rime of the Ancient Mariner every time.

First published in 1876, Doré’s Mariner went through 30 editions in the subsequent 25 years, which should give you a better idea of just how in-demand his work really was.  (And, in fact, continues to be.)  The book features an elaborately gilt pictorial cloth binding and 38 folio-sized engravings.* 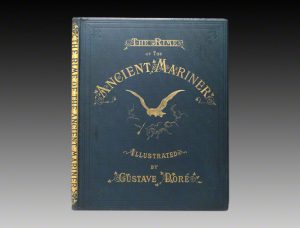 Early American edition of the Dore-illustrated Rime of the Ancient Mariner. Harper & Brothers, 1881.

As a rule, none of Doré’s engravings – for any of his works – are especially bright or cheerful.  Instead, they are melancholy in the extreme.  But, they are also masterful.  Over the course of Mariner’s 38 engravings, Doré manages to render with equal skill ghost ships and whirlpools, angels and corpses, desperation and fleeting hope.

He is particularly gifted in his depictions of water: the chop and foam of the waves, the rising swell of a storm, the eerie flatness of a dead calm.

But perhaps the most arresting – if not what I would say is the most beautiful – image in Doré’s Mariner is the shooting of the albatross.

Dickinson wrote that “the difference between Despair / And Fear – is like the One / Between the instant of a Wreck / And when the Wreck has been.”  That’s what Doré captures in this image – a disaster you see coming but cannot avert.

*In bookbinding, the term “folio” has a specific technical meaning, which is generally the way we use it at BRB.  That said, in everyday practice, it is often used more generally when referring to a larger format book.  Doré’s Mariner is roughly 16 x 19 inches.