They Got Their Hands Dirty: Five Authors Who Were Also Printers

We’ll start with the easy one. Today most of us remember Franklin for his contributions to the founding of the United States and his scientific work on electricity. But even after he’d made a name for himself outside of his first occupation, throughout his life Franklin would still sign letters as “B. Franklin, Printer.” 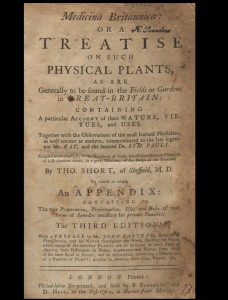 The title page of a 1751 book printed by Franklin on medicinal uses of flora.

Franklin began working in his brother James’ printing office at the age of 12, but soon hungered for more than menial tasks. He begged James to allow him to write some content. His brother refused. Naturally, Franklin the innovator found another way: at 16 he began to write a series of letters under the pseudonym “Silence Dogood,” supposedly a middle-aged widow. Ms. Dogood was so amusing that a number of readers actually wrote in offering to marry her.

2. Mark Twain
Like Franklin, Mark Twain’s adolescent years were spent amidst the whir of the printing press. After only a short time as a printer’s devil (essentially a young apprentice who did most of the dirty work), Twain began writing editorial content for newspapers as young as age 13. 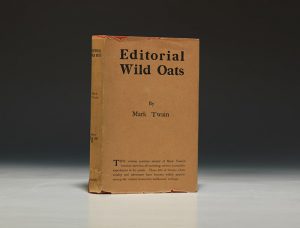 A 1905 collection of essays by Twain on his early adventures in printing and journalism.

Twain recounts with glee one of his earliest notes that attracted attention:

While setting up the piece I was suddenly riven from head to heel with what I regarded as a perfect thunderbolt of humor, and I compressed it into a snappy footnote at the bottom…
the paper came out, and I never knew any little thing to attract so much attention as those playful trifles of mine. For once the Hannibal Journal was in demand…Higgins [the man who was the center of Twain’s joke] dropped in with a double-barreled shotgun early in the forenoon. When he found that it was an infant (as he called me) that had done him the damage, he simply pulled my ears and went away, but he threw up the situation that night and left town.

3. Walt Whitman
I’ve written a bit about the effect of Whitman’s training as a printer on his work elsewhere, but it’s quite astonishing to read just how deeply Whitman attached himself to the process of printing:

I sometimes find myself more interested in book making than in book writing. The way books are made—that always excites my curiosity: the way books are written—that only attracts me once in a great while.

In fact, Whitman’s first authorial appearance in a book was a short story in a collection of “sketches, essays, and poems by practical printers” printed five years before Leaves of Grass.

Whitman was intimately involved with the design details of each edition of his books, and often experimented in ways that mimicked the innovations in the text. For example, the 1860 edition of Leaves of Grass contained new poems with imagery bordering on pornographic (the “Enfans d’Adam” poems). To accompany this edition, Whitman added sperm into the decoration of the title page. 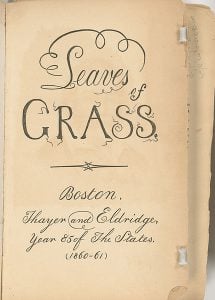 The title page of the 1860 edition of Leaves of Grass.

You can read all about the influence of the press on Whitman from this excellent article by Ed Folsom.

4. William Morris
Unlike the other authors on this list, Morris is more famous today for his contributions as a printer than as a writer. So I’ll take the opposite hand here and talk a bit about his career as writer, which is so often overlooked.
As a member of the Pre-Raphaelite movement (which praised the aesthetic of artists before Raphael, i.e. mostly the Middle Ages), Morris paradoxically looked to the distant past for innovation. In fact, Morris used medieval history as an inspiration to create fantastical realms entirely made from scratch—a huge innovation in the fantasy genre which had mostly limited fantastical elements to our own world (if even, in some cases, unknown areas of our world). 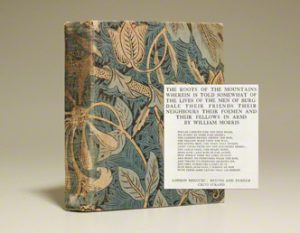 The 1890 edition of Roots of the Mountains, the only book published with a Morris and Co. cloth binding.

So now I can’t help mentioning Tolkien, who was deeply influenced by Morris. A recent dissertation even argues that Tolkien’s “achievements would not have been possible without the example of [Morris’ 1889 romance] The Roots of the Mountains to build upon.” One most interesting reference: Morris’s book The Well at the World’s End contains a character named Gandolf.

5. Virginia Woolf
I’m rounding out today’s list with an author who got into the printing business almost as an afterthought. Virginia’s husband hoped it would become a hobby that would be therapy for her depression. According to Jessica Svendsen, for her 33rd birthday Virginia and her husband Leonard decided upon three gifts: a house named Hogarth, a bulldog named John, and a printing press.

Excited about learning the process of printing, the Woolfs applied to a local school of printing. They were rejected because they were not trade union apprentices. However, after speaking with the owner of a printing supply company, they decided to pursue printing anyway. The owner must have been quite the salesman: they purchased from him the press, type, accessories, and a 16-page manual that would “infallibly” teach them the art of printing. 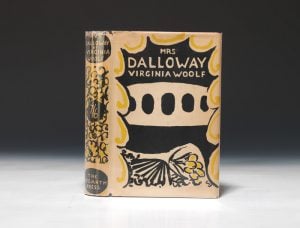 A first edition of Mrs. Dalloway (1925), first published by Woolf’s own press with dust jacket art by her sister Vanessa Bell.

Needless to say their first attempts were rather comically bad. Teaching oneself to use a handpress was hard work. In an early letter by Virginia, after one hard day Leonard “heaved a terrific sigh,” saying: “I wish to God we’d never bought the cursed thing.” She continues,

To my relief, though not surprise, he added ‘Because I shall never do anything else.’ You can’t think how exciting, soothing, ennobling and satisfying it is.

The Hogarth Press would go on to print some of the most important works of the early 20th century—not only by Virginia Woolf, but by T.S. Eliot, E.M. Forster, Vita Sackville-West, and others. Yale University has an excellent introduction to the Hogarth Press here.

Do you have any favorite printer/authors I missed?