John Dickinson, the “Penman of the Revolution,” was the most prolific and influential political writer of the period and a famous defender of American rights and liberties. 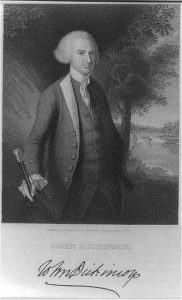 Thomas Jefferson wrote this tribute after hearing of Dickinson’s death:

A more estimable man, or truer patriot, could not have left us. Among the first of the advocates for the rights of his country when assailed by Great Britain, he continued to the last the orthodox advocate of the true principles of our new government: and his name will be consecrated in history as one of the great worthies of the revolution.

Dickinson “contributed more writings to the American Founding than any other figure… Between 1764 and 1803, he was the author of approximately ninety publications, including many of the seminal treatises and state papers of the era,” noted Jane Calvert of the John Dickinson Writings Project.

Paul Leicester Ford described Dickinson’s position in the literature of the Revolution “as pre-eminent as Washington in war, Franklin in diplomacy, and Morris in finance. From no other leader of that movement originated a series of arguments of half the number, importance or popularity.”

He was a prominent lawyer and an important member of the Pennsylvania Assembly, the Stamp Act Congress, the First and Second Continental Congresses, the Confederation Congress, and the Constitutional Convention. He fought in the Revolutionary War, and he served as president of Delaware and Pennsylvania. A Quaker abolitionist, he repeatedly proposed legislation to abolish slavery, and he was the only Founder to free his slaves. He even wrote America’s first patriotic song, “The Liberty Song,” with the first appearance of the phrase “by uniting we stand, by dividing we fall.”

Why did John Dickinson become a Forgotten Founder? His remarkable history was obscured and his reputation destroyed by one act—he didn’t vote for independence on July 2, 1776.
“The first wish of my soul is for the Liberty of America. The next is for constitutional reconciliation with Great Britain.” Dickinson long argued for both and tried to prevent a devastating war. He eventually realized that Britain’s actions made this impossible, but he believed independence should be delayed until after America had formed a government, prepared for war, and secured foreign alliances, or else they would “brave the storm in a skiff made of paper.”

John Adams wrote in his autobiography about Dickinson’s July 1st speech in Congress:

The greatest and most solemn debate was had on the question of Independence. The Subject had been in Contemplation for more than a Year and frequent discussions had been had concerning it… Mr. Dickinson however was determined to bear his Testimony against it… He had prepared himself apparently with great Labour and ardent Zeal, and in a Speech of great Length, and all his Eloquence, he combined together all that had before been written in Pamphlets and Newspapers and all that had from time to time been said in Congress by himself and others. He conducted the debate, not only with great Ingenuity and Eloquence, but with equal Politeness and Candour….

Dickinson understood the consequences of his refusal to support independence at that crucial moment:

The Consequences involvd in the Motion now lying before You are of such Magnitude, that I tremble under the oppressive Honor of sharing in its Determination. I feel Myself unequal to the Burthen assigned Me… My Conduct, this Day, I expect will give the finishing Blow to my once too great, and, my Integrity considered now too diminish’d Popularity.

You can watch part of Dickinson’s speech in this video clip from HBO’s “John Adams” miniseries.
“Dickinson made a great error of timing and judgment and opposed the Declaration of Independence… Historians have too often judged him by his position in July, 1776, and have thereby been led into a misunderstanding of him and his significance,” wrote David L. Jacobson.

But few people know that Dickinson ensured that independence would pass by choosing to abstain in the final vote instead of voting against it.

The vote for independence had to be unanimous—if any colony voted no, the resolution would fail. Each colony had one vote, decided by its delegation in Congress. In the July 1st vote, Pennsylvania’s delegation split 4 to 3 against independence. On July 2nd, Dickinson and Robert Morris abstained so that the 3 votes in favor of independence would have the majority, changing Pennsylvania’s vote from no to yes. Dickinson chose not to stand in the way of the will of Congress, though he had the power to do so. Days later, he left Congress and volunteered for military service in defense of America.

In my next post, I’ll introduce you to some of Dickinson’s most important works.