After seeing the dark mystery and intrigue to be had in Paris at night in the thirties, Brassaï took it upon himself to leave no source of light or reflection undocumented. Even when he used a flashbulb to illuminate his subjects, he accepted the flaws, and in doing so created cinematic prints unrivalled in their detection of delicate nocturnal moments.

When I lived in London, I would often take what I called “long walks.” Boarding the first train leaving Waterloo station in the early hours of the morning, I would arrive just in time for a civilized breakfast in the heart of Paris. From there I would choose a direction and walk the city’s limits until it was time to head home on the last departure from the Gare Du Nord.

Often I would find myself wandering streets not described in any guide book—and for good reason. The hives of activity I encountered were not generated by people and businesses that the city, or any city, is necessarily proud of. Yet in an age of global commercial homogeny, these are the areas that still maintain a semblance of a city’s former individual character. And at night, Paris’ character really comes to life. 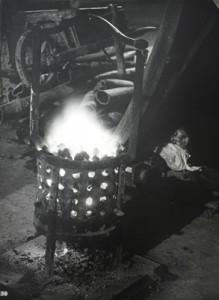 Take the image of the street fire by which the man sleeps under a makeshift home (left). The fire is roaring, yet at its heart you can see the faint outline of the coals that power it. Despite the obvious sadness of the situation, it is a most peaceful scene. In another moment, socialites discussing their glamorous nighttime adventure are caught in the glow of a restaurant’s radiant lights. So gorgeous is the play of shadow and light on their clothes that, if I didn’t know better, I’d swear they were painted in.

I wouldn’t be the first to think there must be more to these prints. All of the people I have watched turning the pages of Paris de Nuit have at some point looked at their fingertips expecting to see them covered in thick black ink, such is the richness of the black shapes before them. I believe this awe is a wonderfully human testament to the extremely high quality of the photogravures within this book.

Here the composition is expert, the lighting superb and the subjects engaging. Combine these qualities with an unbelievable print aesthetic and this photographic journey is as revelatory as any I ever made on foot.