Isaac Asimov said, “Science fiction stories are extraordinary voyages into any of the infinite supply of conceivable futures.” During the Golden Age of science fiction (sf), roughly the 1930s-1950s, those futures beckoned with special brilliance.

The first stirrings of sf’s Golden Age could be felt well before it “really” began.

Around the turn of the 20th century, Jules Verne’s voyages extraordinaires and Wells’ “scientific romances” found ready readers in the United States, but Edward Bellamy, a journalist with a strong social conscience, gave the nation its first homegrown sf. In Looking Backward, 2000-1887, protagonist Julian West awakens at the dawn of the 21st century to find himself in an America that has become an egalitarian, technologically advanced utopia. 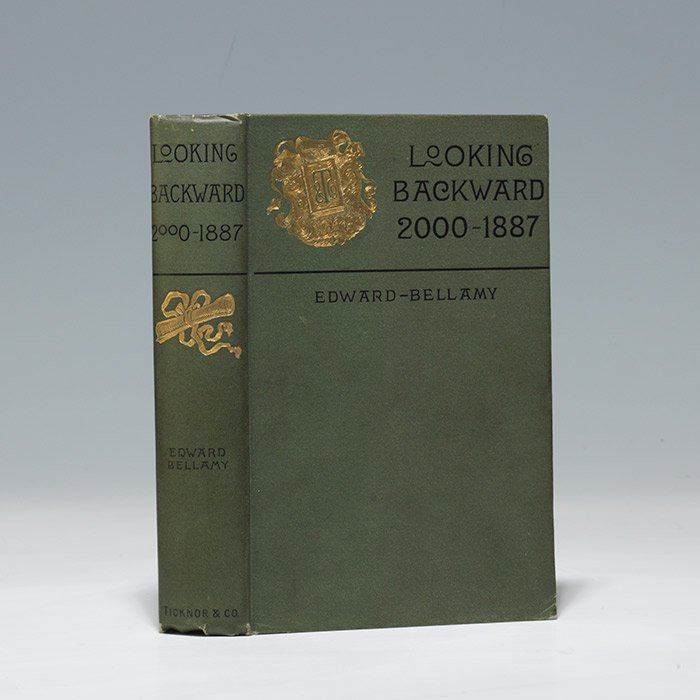 Its vision of progress toward a perfected future makes Looking Backward the Gilded Age’s Star Trek. It proved popular enough to justify such comparisons: It sold phenomenally well (half a million copies in three years), inspired over 100 “Bellamy Clubs” and scores of sequels from other writers, and won fans including Charlotte Perkins Gilman, George Bernard Shaw and Mark Twain. But unlike Twain’s own Connecticut Yankee in King Arthur’s Court, Looking Backward ends with its time traveler staying in the future. Bellamy’s refusal to explain away West’s experience as a dream reflects the author’s conviction that “the Golden Age lies before us and not behind us, and is not far away.”

Read about our excellent available copy of Bellamy’s influential book. 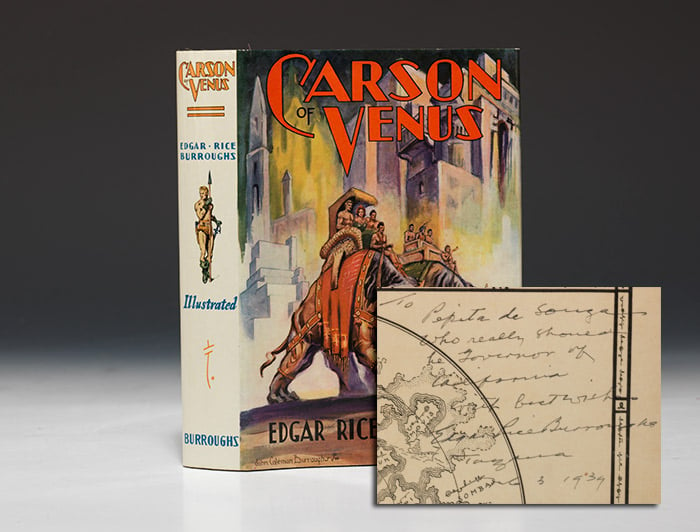 It emerged from the pulps—mass-distributed fiction magazines printed on cheap, coarse, wood-pulp paper. Once they’d run through reprints of Wells and Verne, pulp editors sought writers who could steadily supply fresh tales of fascinating exploits and startling ideas.

Pulp writers didn’t always deliver. At least one pulp reader knew it. He was a financially struggling manager of pencil sharpener salesmen in Chicago, and thought (as he later recalled), “If other people got money for writing such stuff I might, too, for I was sure I could write stories just as rotten as theirs.”

Edgar Rice Burroughs went on to create several of the pulps’ most iconic characters, chief among them John Carter, warlord of Mars, and the lord of the jungle, Tarzan. Burroughs didn’t claim he wrote serious “literature”—he said he belonged “with the aerial artist, the tap dancer, and the clown”—but his high adventures set in other, exotic worlds entertained and entranced countless readers (and still do). 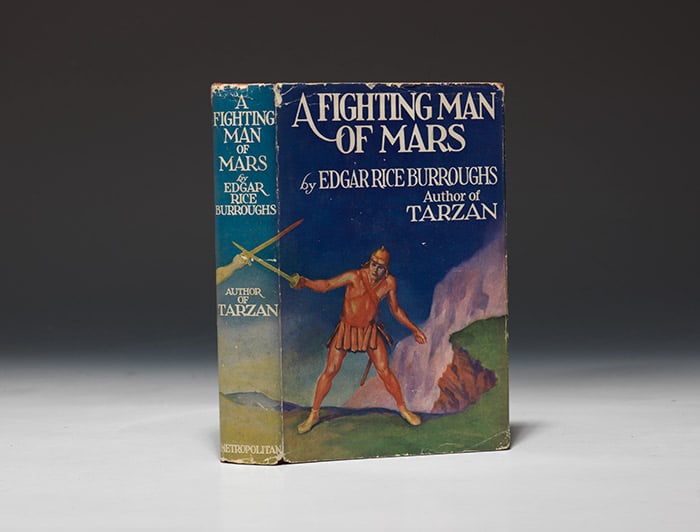 Read about our extensive selection of books by Burroughs, including an outstanding inscribed first edition of Carson of Venus.

Escape to the Astounding Future 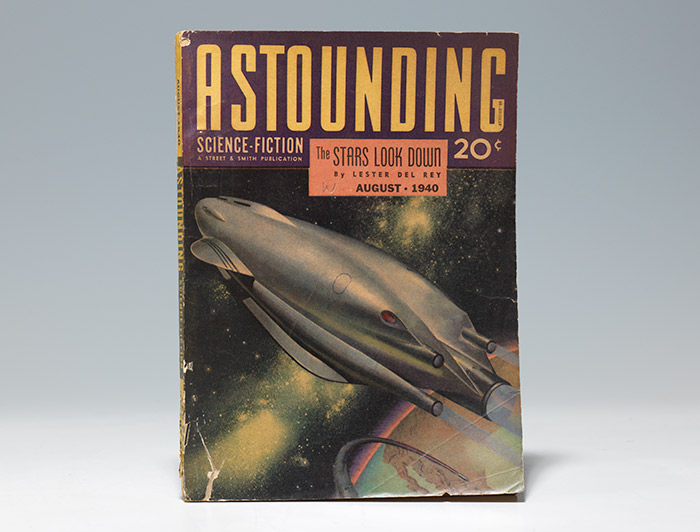 In 1938, the quality of magazine sf made a quantum leap forward when John W. Campbell, Jr. took the helm of Astounding Science-Fiction. The magazine shone like a supernova during the World War II years. Astounding defined the future for tens of thousands of readers eager to help shape it (including a young Arthur C. Clarke, whose first two professional stories appeared in its pages in 1946).

Campbell’s roster of writers is a catalog of sf’s brightest stars: 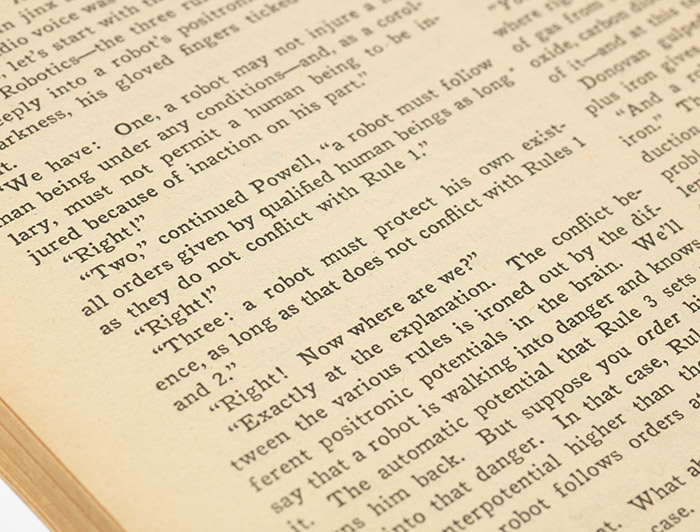 The Three Laws of Robotics by Asimov in his story “Runaround”, the first publication of all three laws together, from the March 1942 issue of Astounding (BRB 104266) 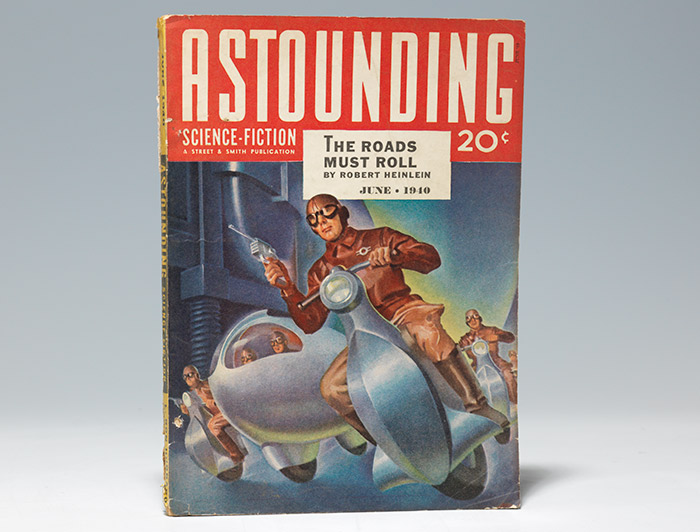 Astounding Science Fiction issue from June 1940, with cover story by Heinlein, the famous “The Roads Must Roll” (BRB 104266) 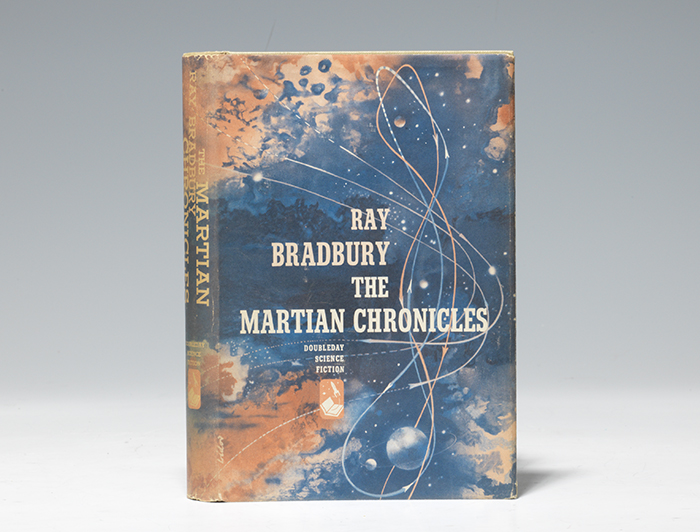 Throughout his career, Ray Bradbury defied simple categorization as a “science fiction writer.” His fiction straddles sf, fantasy, horror, nostalgic reverie—but much of it provokes the “sense of wonder” that pulsed so strongly in sf’s Golden Age.

In The Martian Chronicles, his famous collection of closely linked short stories, Bradbury presents a “future history” very different from Heinlein’s. His accounts of humanity’s exploration and colonization of the Red Planet are evocative “snapshots,” richly symbolic and frequently lyrical, more suggestive than predictive. But when a father promises his children, at the book’s end, that he will show them the Martians, readers find that Bradbury, too, has created a compelling, conceivable future.

Read about our beautiful inscribed first edition of The Martian Chronicles.

The Core of Science Fiction

Some clichés of Golden Age sf—vast galactic empires, faster-than-light rocket ships, jetpack-equipped space patrols, even the occasional bona fide bug eyed monster—amuse us today. But the Golden Age established openness to the future and to change as the heart of the genre.

“It is not that science fiction predicts this particular change or that that makes it important,” said Asimov, “it is that it predicts change…. No sensible decision can be made any longer without taking into account not only the world as it is, but the word as it will be… [We] must take on a science fictional way of thinking… Only so can the deadly problems of today be solved.”

Missed my first post on the Genesis of Science Fiction? Read it here.

What “conceivable future” from the Golden Age of science fiction most compels you?