Caught in the Act

With photography, as with many trades, it is often beneficial to have been trained in some other medium first. The ability to see things from a different perspective often stimulates originality. August Sander trained as a painter, and this skill imbued him with an appreciation for the simplicity of a classical, uncluttered look. It is this sensibility that many photographers since have referenced in their own work.

In each of the photographs in Antlitz der Zeit, Sander’s subjects control the image. He did not cloud his work with his own personality. Nor did he orchestrate the setting in which his subjects posed. These qualities set his images apart. 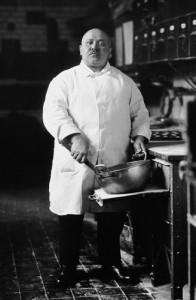 Sander’s work is documentary disguised as portraiture. His intent was to feature subjects readily available to him in their “raw” detailed form, so he photographed all walks of German society that he came across. No one was too great or too small for his gaze. He captured farmers, tradesmen, women and artists. There are soldiers, middle-class families and beggars also involved. All stare directly into the camera and all take priority over their environment. This generic—almost indifferent—treatment serves not only to create elegantly simple portraits, but also cements both the image-maker and the subject in societal history.

Here is an archivist driven to record the human experience through photography. Sander’s images demonstrate a love of country and the people that make up its population, whose professions and passions he paints with subtlety. There are others, such as the pastry chef (left) and the bricklayer (above), who are caught in the act. These two images are among my favourite. For the first time the bricklayer is allowed a moment to demonstrate the strength, poise and grace he possesses – qualities not often associated with his profession, yet here they are. On the face of the pastry chef is the passion and pride he has for his work. In allowing his subjects to be perceived in ways they wanted, Sander created a timeless vision that educated the viewer of the day and informs the viewer of today.