The Meiji era (1868-1912) was marked by Japan’s opening to the West, to the new Western technology as well as Western ideas of modernization. During this crucial time in the nation’s history, few Westerners found themselves in a better position to observe firsthand the sweeping changes that were transforming Japanese society than Captain Francis “Frank” Brinkley.

As a recently minted 26-year-old artillery officer in 1866 Brinkley shipped out to the East to serve as aide-de-camp to his cousin, Sir Richard Graves MacDonnell, the sixth Governor of Hong Kong. On his way there, Brinkley stopped over in Japan. He was so impressed with the culture and the people that he vowed to return. A little over one year later, as the 14-year-old prince Mutsuhito succeeded to the Chrysanthemum Throne, thus ushering in the Meiji era and its reforms, Brinkley did return to Japan. He never left. 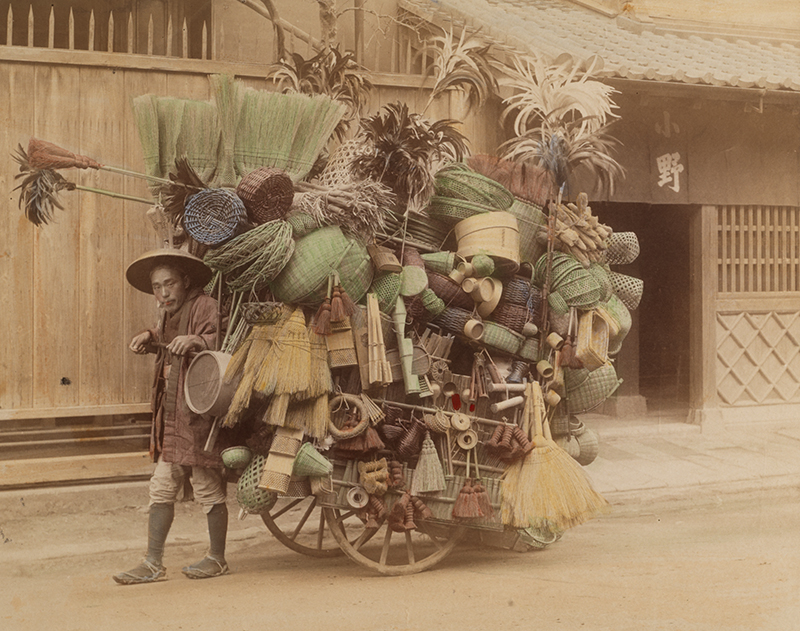 He resigned his commission in the Royal Artillery in 1871 to take up the post of foreign advisor to the Meiji government, and with the British government’s blessing, he taught modern artillery techniques at the new Imperial Japanese Naval Gunnery School. He quickly mastered the Japanese language — spoken and written — and took a Japanese bride, bucking Japanese and British institutions and prejudice to do so. In 1881 he founded and edited an English-language newspaper, The Japan Mail, a position he held until his death 30 years later, and for which he would be most remembered. He was also a regular correspondent on the region for the London Times.

Throughout his long and distinguished career, Brinkley was a passionate advocate for all things Japan. In fact, revealing the breadth and depth of Japanese culture, art and history to the West — and thereby improving Anglo-Japanese understanding and relations — was his career. Perhaps the pinnacle of his career, then, is his splendidly illustrated ten-volume masterpiece Japan, a work that highlights the fascination with which the West viewed that country at the turn of the 20th century, the height of the Meiji Restoration. 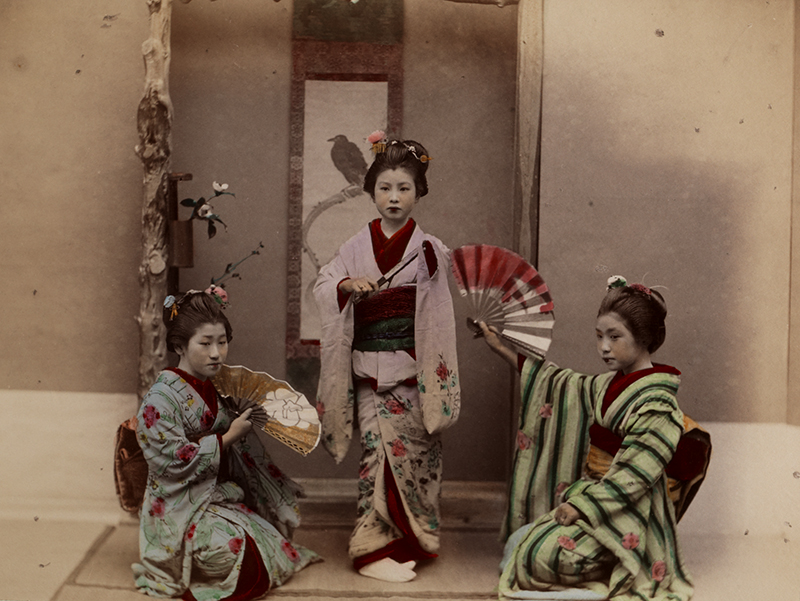 Brinkley served as the book’s editor, but he wanted it to feature writings by Japanese experts, photographs by Japanese photographers, and artwork by Japanese artists. Japan includes chapters on Japan’s cities, buildings, landscape, religions, festivals, history, and its complicated political and economic relationship with the rest of the world — all written by native Japanese scholars. Each volume is profusely illustrated with full-page plates of 19th-century Japan: the collotypes of flowers in each volume are the work of renowned early Japanese photographer Ogawa Kazumasa, and the photographs of people, monuments and landscapes were taken from the collection of Kozaburo Tamamura, an equally respected early Japanese photographer. The photographs were printed and hand-colored in Japan, the text was printed on Japanese paper in a Japanese-style binding, with cloth covers dyed and stenciled in Japan. 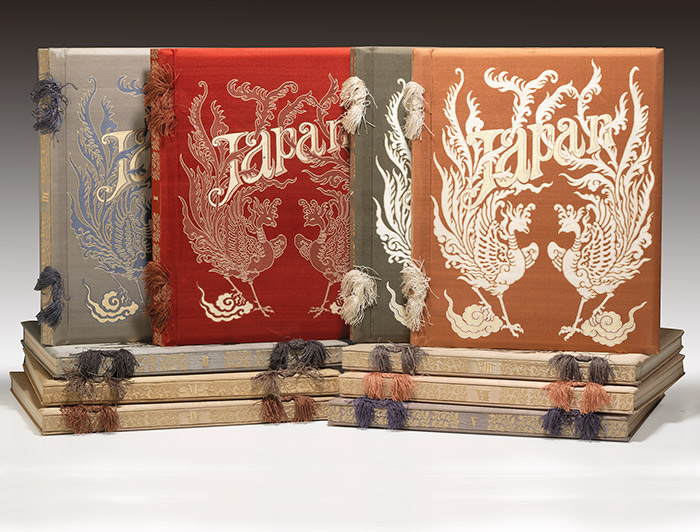 There were many different editions of this popular work. Even the “standard” editions were luxurious showcases of Japanese arts and culture, each volume bound in silk and with all albumen photographs, collotypes and plates finely printed and matted, as though ready to be removed from the bindings and framed. Deluxe editions, however, were printed in much smaller quantities, and contained features not found in the standard editions: fine silk covers with hand-stenciled designs, each volume with a different illustration; handmade decorative Japanese paper endpapers; twice as many full-page hand-colored albumen photographs, with more vivid and detailed colorization; tipped-in and hand-colored in-text albumen photographs rather than black-and-white half tones printed directly on the page. 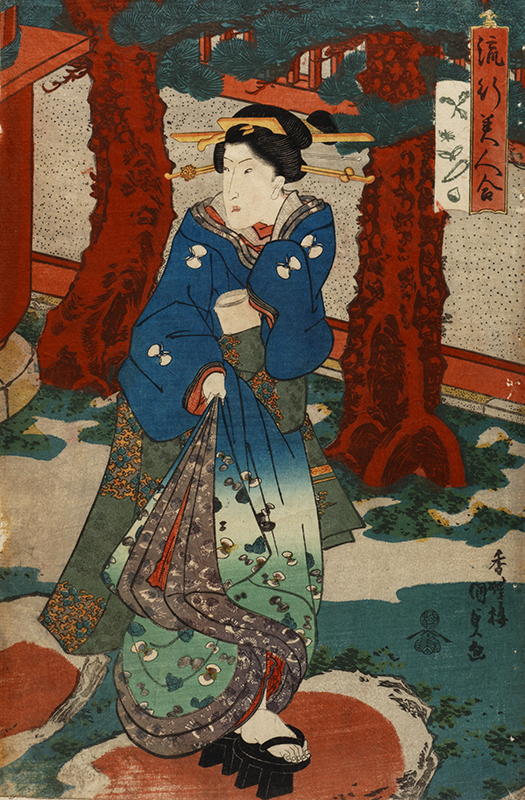 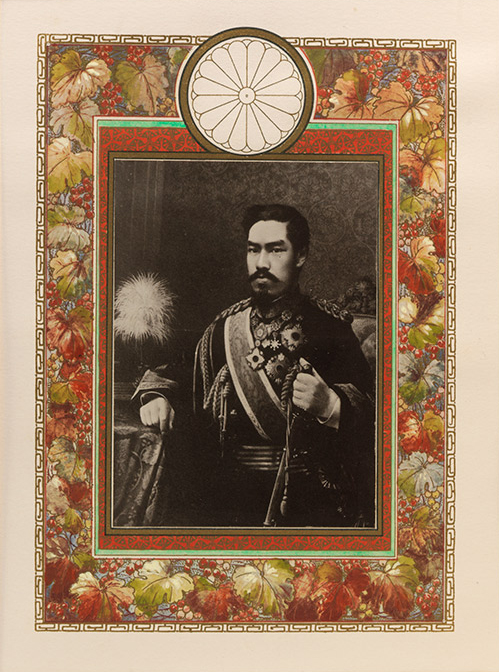 For any collector interested in Japan during this critical period of the country’s modern history, Brinkley’s Japan provides a rare and privileged glimpse into that time and place. Ultimately, Brinkley’s work is, unavoidably, an example of the Western gaze peering at an “exotic” culture, but this is carefully balanced by Brinkley’s own unique perspective as a devoted life-long student of that culture, and also by his insistence on including Japanese voices and artists throughout the work, and allowing them to tell their own stories — a stirring combination that reflects the outward-turning Meiji-era policies and philosophies, and melds them into a fascinating book still much sought-after by collectors today. 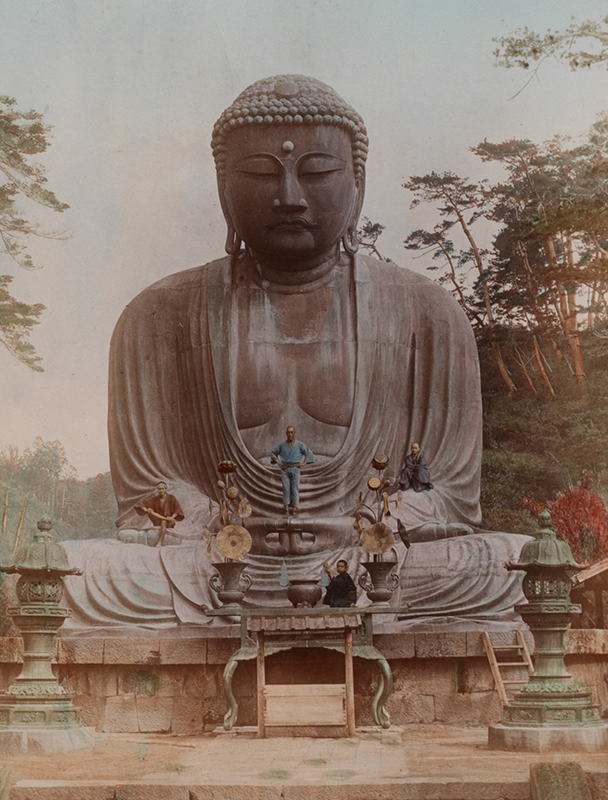