Bibles Don’t Get Any Bigger Than This: The Macklin Bible of 1800

If you’ve ever visited our Las Vegas gallery, you’ve probably noticed that we have a sort of inner sanctum built in. Just behind that huge wall of books is the “Library,” where we keep all those lovelies that we can’t currently fit into our front showcases. 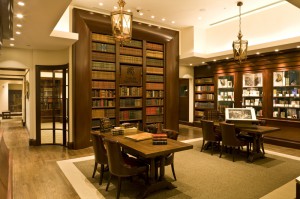 Our Las Vegas gallery, with the Library ensconced behind the central wall of books.

It’s also where we keep books that are literally too large to fit into our showcases.


Right now our biggest specimen is the Macklin Bible of 1800—the largest English Bible printed on a letterpress.* Produced in 7 volumes, each book measures 16 by 19 inches. Altogether the production weighs well over 100 pounds. 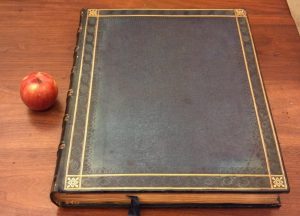 A single volume of the Macklin Bible, with an apple for scale.

Heavens, this book is beautiful. Each volume is illustrated with 10 copperplate engravings after paintings by some of the foremost artists of the day (Reynolds, Gainsborough, Fuseli, and more). The production was the baby of printseller Thomas Macklin, who deserves points for execution, though not for creativity…


You see, Macklin was actually just copying the successful m.o. of another print dealer, John Boydell, who is probably the man most responsible for creating the native print market in England at the end of the 18th century. Boydell had commissioned paintings for a Shakespeare Gallery which he then turned into a lavish printing production of 100 plates in elephant folio size (22 by 27 inches). Boydell meant for his project to become a great national work to rival the extraordinary French productions of the 18th century, and to stimulate work and demand for native English engravings. 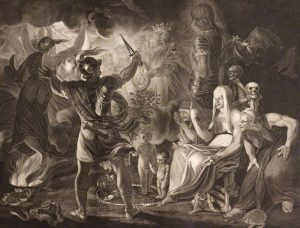 A plate from Boydell’s Shakespeare Gallery, depicting a scene in Macbeth.

But I really shouldn’t disparage Macklin for copying Boydell. After all, in this competition between print dealers, we ended up the winners. New type and new paper were created specifically for Macklin’s project. The best artists and engravers of the day were put to work. The Macklin Bible cost an estimated £30,000 in its day, and Macklin himself is said to have spent up to £300,000 in his lifetime as a patron of the arts. 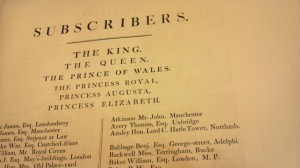 The first part of the subscribers page.

Why am I still writing? All I really need to do in order to convince you of this book’s impact is show you some of the plates:

Macklin’s massive production put him in so much debt he had to sell paintings from some of his previous projects, as well as rely on the assistance of a patron himself. The last of the engravings was completed just five days before his death.

If you visit Las Vegas within the next few months, stop by and take a look at this massive set. We’ve got one volume open on the table in the library. You can come in and turn the pages yourself.

*There is one English Bible larger than the Macklin, but it was printed using a rubber stamp press. Check out this great video on the Waynai Bible of 1930.