I’ve mentioned more than once the influence of Aubrey Beardsley on the artists featured in this miniseries – e.g., Kay Nielsen (see “Tales from the Old North”) and Harry Clarke (“Orangutans and Other Murderers”).  So, I thought you might like to know what all the fuss is about.

Beardsley published his first illustrations in the mid 1880s, while he was still a student in Bristol, England.  After some twists and turns, and under the guidance of Edward Burne-Jones (a hugely influential Victorian artist), Beardsley declared himself an artist circa 1891.  (He didn’t give up his day job as a clerk in an architecture office though – not just yet.)

Shortly after “declaring his major,” Beardsley spent time in Paris, where he first encountered the now-famous poster art of Henri de Toulouse-Lautrec and Japanese woodcuts – both of which exerted a lasting influence on his art.  (Never heard of Toulouse-Lautrec?  Don’t know a woodcut from a woodshed?  Not to worry – you’ll recognize the style if not the specifics. )  In retrospect, the blending of these influences, not only in Beardsley’s work but in the larger aesthetic sensibilities of the day, can be identified (at least in part) as the underpinnings of the Art Nouveau movement.

In 1892, London publisher J.M. Dent hired Beardsley to create illustrations for an edition of Thomas Malory’s Morte d’Arthur.  It’s not entirely clear how Beardsley came to the publisher’s attention, but they were looking to compete with the insanely beautiful books produced by William Morris’ Kelmscott Press, and Beardsley was elected as the man to make that happen.

This was artist’s first professional commission.  He was 20 years old. 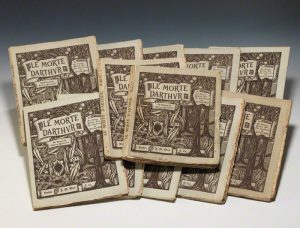 1893-1894 first edition of Beardsley’s illustrated edition of Malory’s Le Morte d’Arthur in the original wrappers. One of only 300 copies printed on handmade Dutch paper.

Issued in twelve parts between 1893-1894, Beardsley’s Arthur includes 15 full-page and 5 double-page illustrations, along with hundreds of initials, borders, and in-text decorations – all done in black-and-white.

I’d love to say that this was the beginning of a long and storied career for Beardsley, but alas the poor man died of tuberculosis in 1898. He was 25 years old.