You will see by the Newspapers, which I from time to time inclose, with what Rapidity, the Colonies proceed in their political Maneuvres.

– John Adams letter to Abigail Adams, July 10, 1776
Newspapers played a crucial role in early America. They turned the tide of public opinion towards independence by quickly and efficiently spreading information and propaganda throughout the colonies and printing the best political writings of the period.

By 1775 there were 38 newspapers in the colonies, most of which were published once a week. The Pennsylvania Evening Post was one of the only papers at the time to publish three times a week, so it was often the first to print breaking news in Philadelphia. (Daily newspapers did not begin until the mid-1780s.) Very important news that arrived between issues or documents too long to fit within a regular issue were sometimes separately printed as an “Extraordinary,” “Supplement,” or “Postscript.” 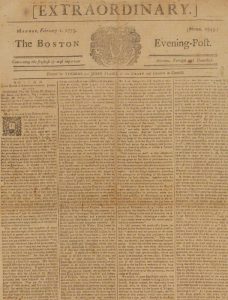 February 1773 Boston Evening-Post “Extraordinary,” a message to the Governor from the Massachusetts House of Representatives objecting to taxation of property without consent. (BRB 62592)

A typical colonial newspaper was one large sheet folded once to create four pages roughly 10 by 15 inches in size, densely printed in three or four columns of very small type. Then, as now, advertisements were a major part of each issue. These advertisements are a rich source of information on the economy and everyday life, and ads placed by booksellers and printers give us clues about the publication dates of important books and pamphlets. 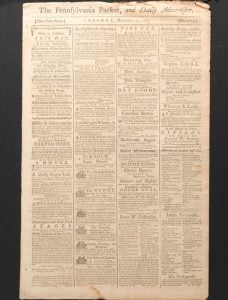 December 1787 issue of the Pennsylvania Packet, with advertisements on the front page. (BRB 84792) 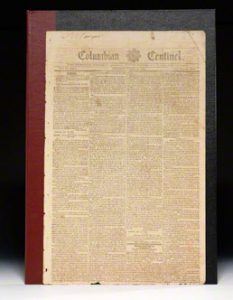 it took postriders a week to travel from New York to Boston, at least two days from Philadelphia to New York, and a fortnight or more to reach the Southern states. When stagecoaches came into general use about 1785, the delivery of letters and newspapers was speedier and more consistent. 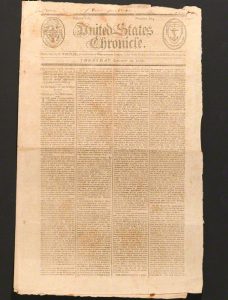 You can see this by tracing the spread of important news through newspaper printings. The first newspaper printing of the Declaration of Independence was in July 6th in Philadelphia, followed by other Philadelphia printings from July 8th to 10th. The first newspaper printing in Baltimore was on July 9th; in New York on July 10th; in New London on July 12th; in Providence on July 13th; in Hartford on July 15th; in Exeter and Salem on July 16th; in New Haven and Worcester on July 17th; in Boston and Newport on July 18th; and in Williamsburg on July 19th.
News of the Declaration reached London on August 10th but the full text wasn’t printed until August 17th. Brigham notes that the voyage from England to America took an average of two months in the early part of the 18th century and by 1785 was seven weeks. Far longer voyages due to storms and other delays were common, though there were some “exceptional voyages” of only five or six weeks.

Many important government documents first appeared in newspapers and preceded the official printings, as in the case of James Madison’s proposed amendments to the Constitution. Introduced in Congress on June 8, 1789, the earliest printings of this first draft of the Bill of Rights were in three New York newspapers on June 12th and 13th. 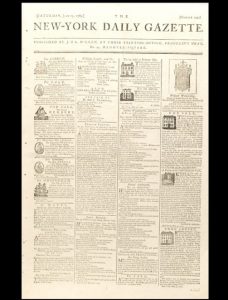 June 13, 1789 issue of The New-York Daily Gazette, one of the earliest printings of Madison’s proposed Bill of Rights. (BRB 85810)

One of America’s most famous and influential political works was first printed in newspapers. The Federalist Papers were a series of 85 essays published between October 1787 and August 1788 in various New York newspapers. Published under the pseudonym Publius, the essays were written by James Madison, Alexander Hamilton, and John Jay, who strongly and persuasively argued for the ratification of the Constitution. Jefferson declared them “the best commentary on the principles of government which ever was written.” 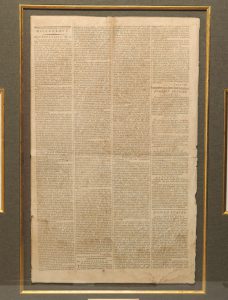 On March 22, 1788, the first 36 essays were collected and published in book form by New York printers J. and A. McLean, and a second volume containing essays 37 to 85 was published on May 28, 1788. (The final eight essays were previously unpublished and did not appear in newspapers until the summer of 1788.) This two-volume work, of which only 500 copies were printed, is the first edition of The Federalist. 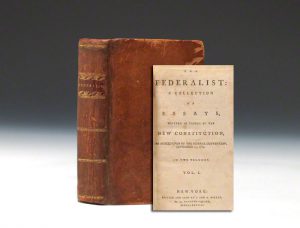 “Pray, if it is not a secret, who is the author or authors of Publius?” George Washington asked Henry Knox in February 1788. The identity of the authors was a well-kept secret for many years. The 1802 second edition of The Federalist was the first to reveal that the essays had been written by Hamilton, Madison, and Jay. The 1810 edition was the first to identify the author of each essay, based on a list created by Hamilton before his death, which credited Hamilton with 63 essays and 3 jointly with Madison, 14 by Madison alone, and 5 by Jay. For the 1818 edition, Madison gave printer Jacob Gideon his own list, which assigned 29 essays to Madison and 51 to Hamilton. Scholars still debate the authorship of some of the essays.
Today it would be impossible to put together a collection of newspaper printings of all 85 essays, and the first edition of The Federalist is one of the rarest and most important works of Americana.

“News is history in its first and best form, its vivid and fascinating form,” Mark Twain wrote, and these early American newspapers prove that he was right.