The Congress have judged it necessary to dissolve the Connection between Great Britain and the American Colonies, and to declare them free & independent States; as you will perceive by the enclosed Declaration, which I am directed to transmit to you, and to request you will have it proclaimed at the Head of the Army.

– John Hancock letter to George Washington, July 6, 1776, sent with the Dunlap broadside of the Declaration of Independence.

Broadsides are a large single sheet of paper printed on one side, and they are the rarest and most fragile of American ephemera.

Broadsides were frequently used from 1765 to 1789 to inform the public about urgent news and events, government declarations, military announcements, and public meetings, as well as for propaganda, speeches, and political argument. They were often timed to particular events and intended to provoke public reaction, and many were written or printed anonymously.

Mason Lowance, Jr., in Massachusetts Broadsides of the American Revolution, noted that they

contributed significantly to the development of revolutionary sentiment… Broadsides not only provided inflammatory calls to arms, but they were also a call to thought and judgment. For the study of the American Revolution, their presence offers modern readers an unusual mirror of the times, in which may be read the opinions of leaders on the events of the day, as well as more urgent messages designed to alert citizens to the dangers of British tyranny.

Broadsides were quickly printed and distributed in various ways depending on their content and purpose—posted for public display, read aloud, handed out in town squares, passed from person to person, mailed or carried to other cities. Most were soon discarded. Those that were kept were difficult to preserve because of their size and fragility, and surviving copies were sometimes folded or framed.

No colony suffered more than Massachusetts in the years leading up to the Revolution. Boston was the focus of British political, economic, and military repression, but it was also an important center of colonial printing, and the broadsides printed there in the 1770s create a fascinating picture of dramatic events like the Boston Massacre, the Boston Tea Party, the blockade of Boston Harbor, and the Battles of Lexington and Concord and Bunker Hill. Here are two examples: 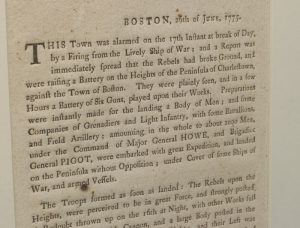 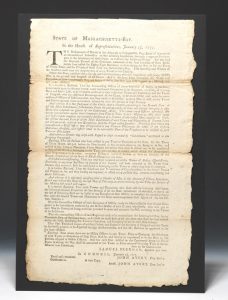 Broadside of a January 25, 1777 Massachusetts House of Representatives resolution enlisting men 16 years of age or older for the Continental Army. (BRB 84897)

The most coveted American broadsides are early printings of important government documents. Some were official printings ordered by the government, like the Dunlap broadside of the Declaration of Independence. Others were independently printed. Here are examples of each: 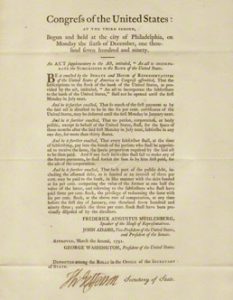 Broadside of a 1791 law concerning the Bank of the United States, one of 22 copies printed by order of Congress, signed by Jefferson as Secretary of State. (BRB 67953) 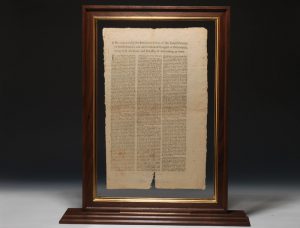 New York broadside of the Continental Congress’ July 1775 Declaration… Setting forth the Causes and Necessity of their taking up Arms. (BRB 85881) 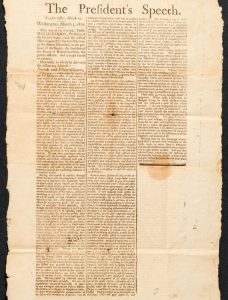 Jefferson’s speech, one of the greatest in American history, was printed in broadsides, pamphlets, and newspapers. Jefferson tried to heal the bitter divisions of the 1800 election and unite Federalists and Republicans, and he reaffirmed the essential principles of the Revolution that would be the foundation of his government:

Equal and exact justice to all men, of whatever state or persuasion, religious or political…; the support of the State governments in all their rights…; the preservation of the General Government in its whole constitutional vigor…; freedom of religion; freedom of the press, and freedom of person under the protection of the habeas corpus, and trial by juries impartially selected. These principles form the bright constellation which has gone before us, and guided our steps through an age of revolution and reformation. The wisdom of our sages and the blood of our heroes have been devoted to their attainment. They should be the creed of our political faith, the text of civil instruction…; and should we wander from them in moments of error or alarm, let us hasten to retrace our steps and to regain the road which alone leads to peace, liberty, and safety.

Broadsides like these captured the words and ideas that are the cornerstones of our nation and institutions, which are just as relevant and inspiring today.